For safe train operation, it is necessary to regulate the position and speed of trains and supervise all driving conditions. The train control system is to achieve this purpose, it has evolved from massive hardware/electrical devices to software-based methods. With the development of train control systems, driverless train operation has been widely applied. The communication-based train control (CBTC) is the most up-to-date train control technology. It automatically protects against the collision of trains by maintaining a safe distance from a preceding train. For this purpose, there are onboard and wayside control units in the CBTC. The CBTC system commonly requires highly reliable control units on the ground because they have to deal with safety-related data. However, since these wayside control units have their own control zone, there are limits to expanding operational flexibility.

In this article, we present the autonomous train control system (ATCS) based on 5G communication. ATCS ensures safe train movement without the centralized wayside control units. In ATCS, trains share directly their dynamic running information with other trains and protect themselves by separating safely from a preceding train. Fig. 1 shows a brief comparison between conventional CBTC and ATCS configurations. In the CBTC system, the wayside control units, such as a zone controller and an electronic interlocking, regulate the position and speed of each train with complex control paths. However, in ATCS, the train can control itself based on train-to-train communication [1]-[2]. We introduce the fundamental principles of ATCS and report its demonstration results. 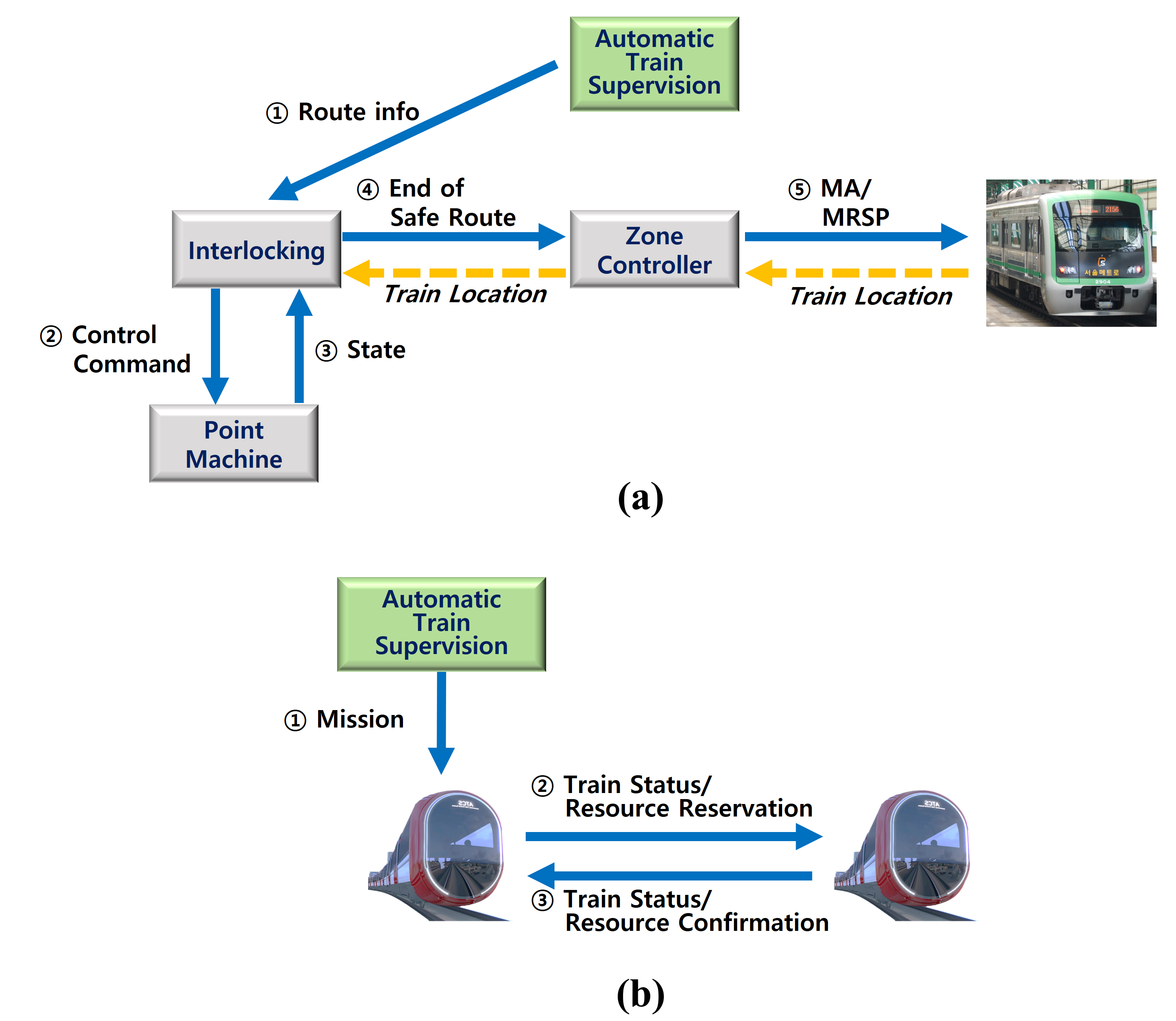 ATCS is a cooperative train control system based on train-to-train communication. Fig. 2 illustrates the key features of ATCS. In ATCS, trains determine their own safe movement distance by reflecting the driving status information of other trains. Since, furthermore, trains send control commands to point machines on their own routes, they directly control the point machines. When irregular and urgent situations occur, trains recognize these situations by themselves and take measures such as dynamic route control to ensure safety. In addition, trains operate coupling and decoupling processes on the move. As a result, these train-centric features of ATCS allow trains to run closer to the preceding train and make more efficient train operations.  Fig. 3 shows the configuration of ATCS. There are an ATCS onboard control unit and wayside infrastructures, and they are connected with wireless communication. The onboard control unit consists of automatic train protection (ATP) and automatic train operation (ATO). ATP performs protection functions and guarantees safe train movement. For this purpose, it executes train localization, train speed monitoring, determination of movement authority (MA), management of static and dynamic speed profiles, track resource control, and calculation of various brake intervention curves. ATO executes automatic driving controls such as acceleration/deceleration of a train and opening/close of doors. In addition, it monitors and manages routes and schedules of trains related to train operation. The ATCS onboard control unit interfaces with train/track information database, sensors measuring the train position and speed (transponder reader, tachometer), and train subsystems such as traction/brake systems and train control and monitoring system. It also shares train driving status information with other trains. In wayside infrastructures, there is automatic train supervision (ATS) for initial scheduling and routing functions. Finally, to directly control the point machines and/or platform screen doors on the route, the object controller (OC) is introduced with a radio connection. 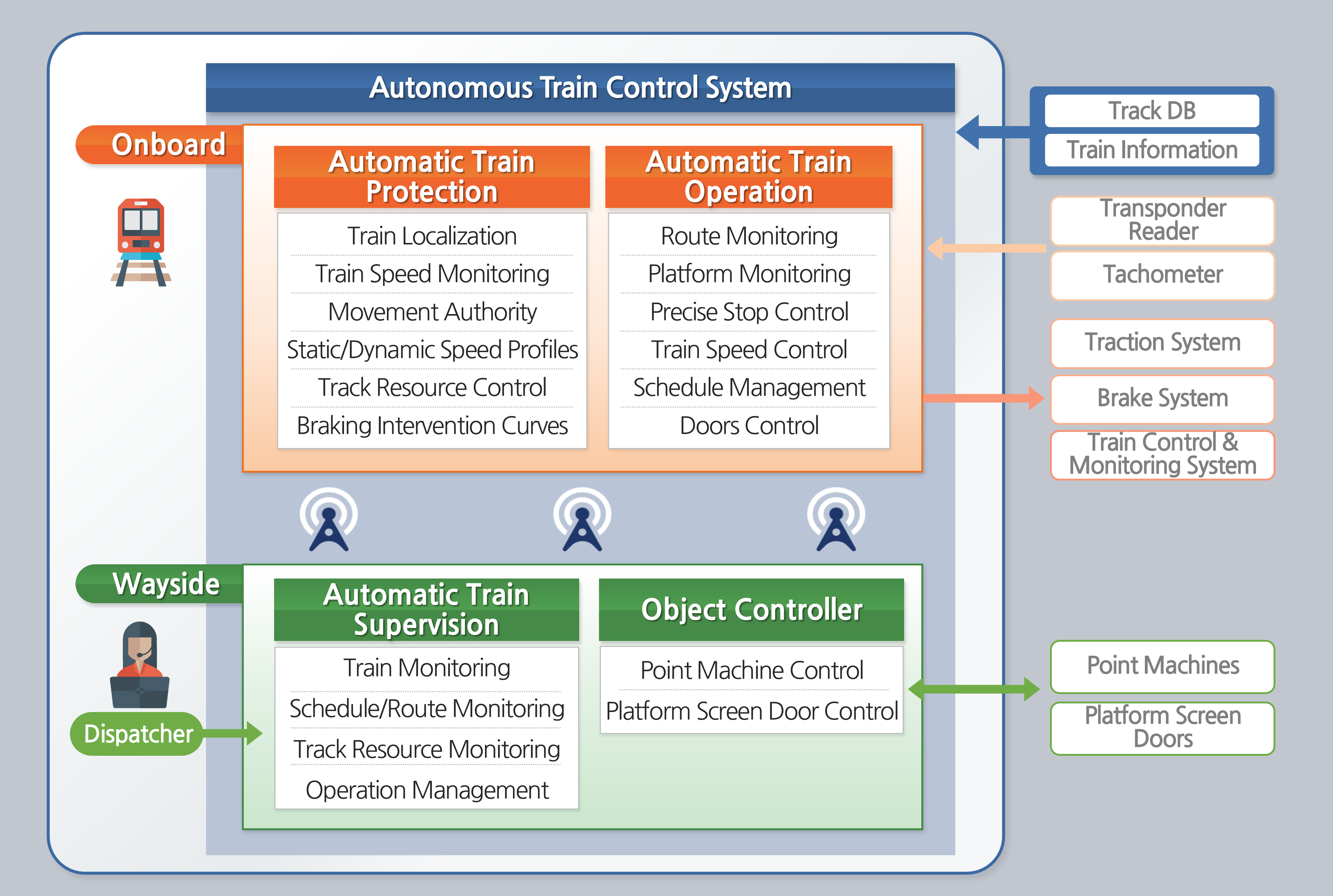 To verify the functions and performances, we made ATCS control unit prototypes. In the onboard equipment, ATP and ATO were implemented by using separate CPU boards with QNX® real-time operating system, as shown in Fig. 4(a). The developed software programs ran on QNX® applications, and the developed language was C++. We also made the OC and ATS prototypes by using industrial personal computers as shown in Fig. 5(a) and (b). OC was designed to interface with the ATCS onboard control unit via wireless communication and the wayside switchboard via wired lines. 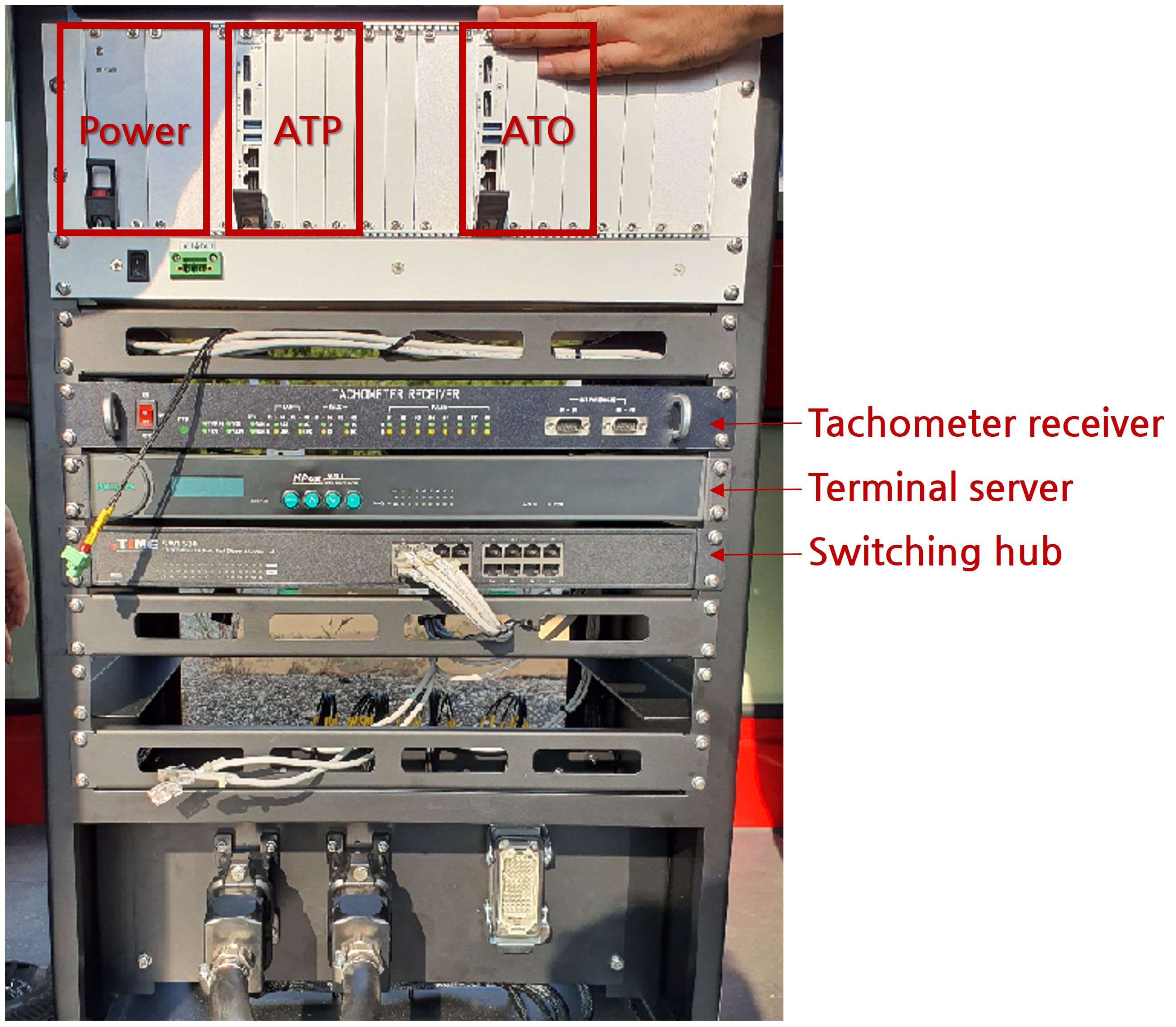 Fig. 5: ATCS control units (a) object controller and (b) ATS. 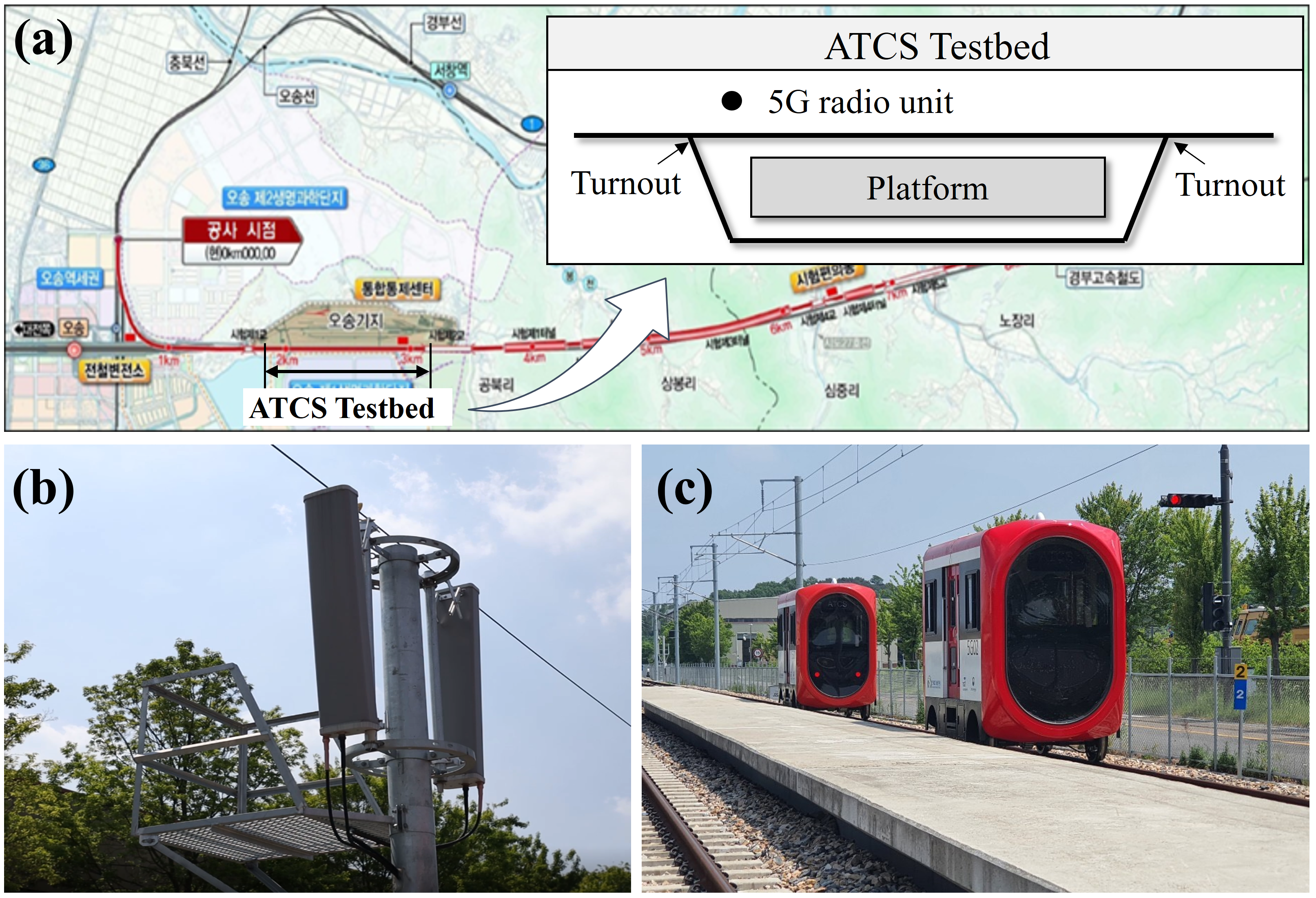 The ATCS control unit prototypes were installed on the testbed with a length of 1.2 km of the Osong test track in South Korea, as shown in Fig. 6(a). This testbed consisted of two turnouts, one 200 m long island platform, and two turn-back points. In addition, to compensate for the train position errors, the transponders based on RFID (Radio Frequency IDentification) were installed in the testbed. For wireless communication, we deployed 5G mobile communication infrastructures (radio units) and confirmed to eliminate any shadow area as shown in Fig. 6(b). We also produced two test vehicles with the size of 4.270 m x 1.920 m x 3.000 m (length x width x height) and the gauge of 1.435 m as shown in Fig. 6(c). The drive method was based on electric motors with a capacity of 10 kW x 2. The maximum speed of the vehicle was designed to be 30 km/h. In the test vehicle, there were an upper-level controller (ATCS onboard control unit), a lower-level controller (acceleration and braking), and a man-machine interface. 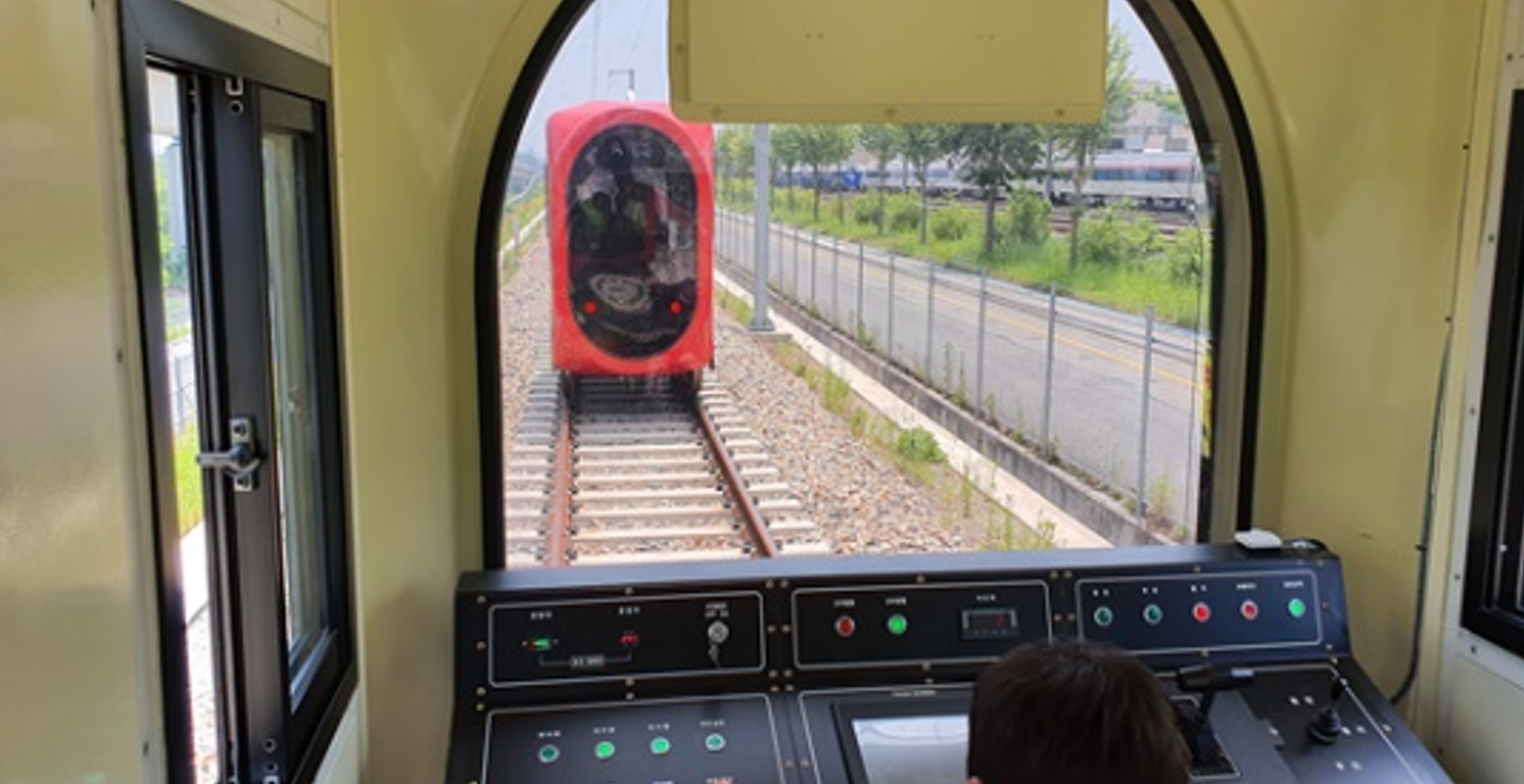 We evaluated the train-centric control function of ATCS in the field test. For this, we set two vehicles to be driving in the same direction and share driving information of the vehicles via 5G communication link. The following train maintained the appropriate safety distance from the preceding train as shown in Fig. 7.

We also confirmed the train-centric point machine control function of ATCS. As shown in Fig. 8, each train directly controlled the point machine on its own route.

We have presented ATCS as the next-generation train control system beyond CBTC. ATCS guarantees safe train movement by cooperating with trains. In ATCS, trains not only determine their own MA by reflecting the driving status but also directly control the point machines on their own route. Due to these train-centric features, the minimum safety distance between consecutive trains in ATCS is smaller than that in CBTC. Thus, the train headway can be also shortened.