The biggest challenge to the commercialization of electric vehicles (EVs) is the battery, which is still heavy, bulky, and expensive even though it has been commercialized for EVs more than 100 years ago. Roadway powered electric vehicles (RPEVs), which is powered directly from a road during transport, are quite promising candidates for future transportation of passenger cars, buses, trucks, and trains, even in competition with internal combustion engines because they do not require large battery energy storage for their traction [1]-[9]. A brief history of RPEVs is described in this article from its advent developments in 1890s to cutting-edge technologies now. Important technical issues in inductive power transfer systems (IPTSs) among wireless power transfer systems (WPTSs) are addressed. Major milestones of the development of RPEVs, focusing on on-line electric vehicles (OLEVs) that have been recently commercialized, are summarized.

The IPTSs for RPEVs should be capable of delivering high power efficiently through moderate air gap for avoiding collisions between the RPEVs and road. The IPTSs are composed of two subsystems: one is the roadway subsystem for providing power, and the other is the on-board subsystem for receiving power, as shown in Figure 1.

Major design goals of the IPTS for RPEVs, which are basically governed by Ampere’s law and Faraday’s law among four Maxwell equations, are summarized as follows:

1) to increase magnetic coupling so that higher efficiency can be obtained;
2) to increase power efficiency for given power capacity, device ratings, and cost;
3) to mitigate electromagnetic force (EMF) for drivers and pedestrians;
4) to manage resonance frequency variation and coupling factor change due to misalignment of pick-up position, air gap change, and even temperature change.

The concept of RPEV, getting required power from a power supply rail while it is driving, came from the first patent in 1894. The first development of RPEV was begun and built for 8-kW wireless power transfer in 1976 by the Lawrence Berkeley National. In 1979, the Santa Barbara Electric Bus Project was started; however, it was not a fully operational system. After these two projects of RPEVs, the partners for advanced transit and highways (PATH) program began in 1992 to determine the technical viability of RPEV in the University of California, Berkeley [7]. The PATH team achieved an efficiency of 60% at an output power of 60 kW with an air gap of 7.6 cm. The RPEV, however, was not commercialized because they used a low operating frequency of 400 Hz due to the absence of fast power switches, good ferrite cores, and litz wires. As a result, a high-power rail construction cost of around US$1M/km, a large power rail current of thousands amperes, a heavy power supply and pick-up coils, acoustic noises, and low system efficiencies were obtained. In addition, the small air gap, small tolerance, and large EMF level are not acceptable for its commercialization.

Since 2009, OLEV has been developed by research teams at KAIST and GIST, Korea. The teams have solved many problems of the PATH project for commercialization such as high-frequency current-controlled inverters, continuous power transfer, low EMF characteristics, and fast dynamic response [1]-[5]. Innovative coil designs and roadway construction techniques as well as a reasonably high frequency of 20 kHz made it possible to achieve the highest power efficiency of 83% at an output power of 60 kW with a large air gap of 20 cm and a fairly good lateral tolerance of 24 cm. Moreover, the power rail construction cost of the OLEV is dramatically reduced to at least a third of that of the PATH project. The primary current is also reasonably mitigated as low as 200 A, and the battery size is significantly reduced to 20 kWh, which can be further reduced by increasing the length of the power supply rails.

As shown in Figure 2, the first-generation (1G) concept demonstration car of OLEV, the second-generation (2G) OLEV buses, and the third-generation (3G) OLEV passenger car were developed and extensively tested at the test sites of KAIST since 2009, and three 3+G OLEV trains had been successfully deployed at the Seoul Grand Park, Korea since 2010. Two upgraded 3+G OLEV buses were deployed at the 2012 Yeosu EXPO, Korea, and other two 3+G OLEV buses have been in full operation at the main campus of KAIST since 2012. In Korea, the 3+G OLEV buses have been firstly commercialized at a 48 km route in Gumi and Sejong, Korea, respectively. 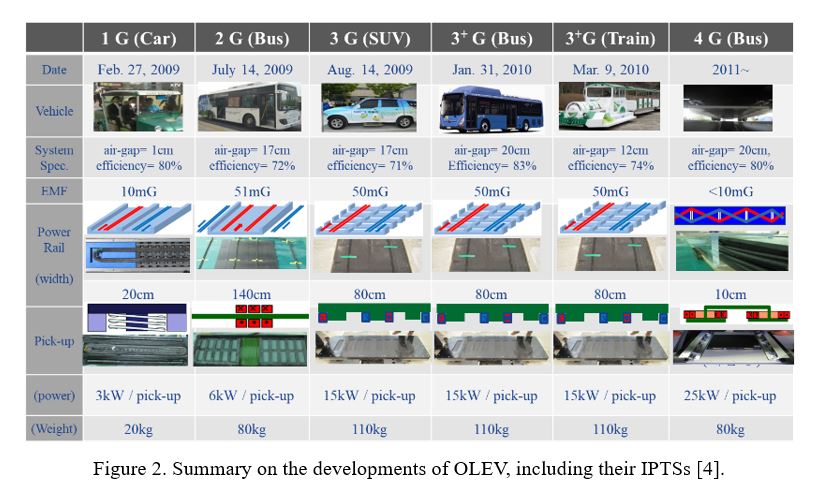 The fourth-generation (4G) OLEV of slim I-type core, showing more practical performances, such as a very narrow rail width of 10 cm, larger lateral displacement of 40 cm, lower EMF level, and a deployment cost reduction of 20% compared with the 3G OLEV, has also been developed. Unlike previous generations of OLEVs, a very low EMF for pedestrians, as low as 1.5μT at a distance of 1 m from the center of the power supply rail, can be obtained [2] because the power supply rail has alternating magnetic poles along the road. The 4G OLEV that overcame one of the drawbacks of the 3G OLEV also adopted a modular concept to reduce the deployment time within a few hours.

To further reduce the construction cost and increase the robustness of power supply rails, the fifth-generation (5G) OLEV of ultra-slim S-type core was recently proposed, which has an S-shape when viewed from the front [5]. The S-type power supply module has a width of only 4 cm, which has been decreased from the I-type width of 10 cm; hence, the S-type model leads to less construction cost and deployment time. Moreover, the S-type model makes it easier to fold itself, which means connecting power cables is no longer necessary after being deployed. The mechanical impact of deploying the S-type power supply modules on the surface of roads is now minimized, which fortunately does not change existing road operation conditions.

In addition to the OLEVs, a few research teams have recently joined to research on RPEVs [8]-[9]: Qualcomm working with the Auckland team developed an IPTS, comprising many small power pads, where the length of a power pad is shorter than that of a vehicle to avoid unwanted energizing and loading. Bombardier has developed IPTS based on the three-phase power system to obtain higher power density, results in a maximum power of 200 kW. Since 2011, the Oak Ridge National Laboratory (ORNL) has been investigating the IPT, which uses many circular power supply coils and pick-up coils. Since 2012, the Korea Railroad Research Institute (KRRI) team has been developing IPTS for high-speed trains and achieved a maximum output power of 820 kW with a system efficiency of 83% at an air gap of 5 cm and a power-supply rail of 128 m.

Although RPEVs are free from the battery problems and are ready for commercialization, RPEVs have not been widely used so far due to the huge initial investment cost. To cope with this problem, there is a need for strong incentive to build the national infrastructure for RPEVs with more public consent. One possible solution is the interoperable charging IPTS, which provides wireless charging for both static and dynamic charging EVs by an IPTS for RPEVs [6].

The size, weight, efficiency, air gap, lateral tolerance, EMF, and cost of the IPTS have been substantially improved, so RPEVs are now viable solutions for future transportation. Especially, interoperable IPTSs will be widespread used in public transportation. As cable EV chargers will be replaced with wireless EV chargers in the near future, the interoperable IPTSs will draw large public attention due to its spontaneous charging opportunity of wireless charging EVs during driving on a road.