Safety is the primary concern in the development of Electric Vehicle Supply Equipment (EVSE). The key safety circuit within an EVSE is the Charge Circuit Interrupting Device (CCID).  The CCID is a personnel protection system for EVSEs that reduces the risk of electric shock.

A Ground-Fault Circuit-Interrupter (GFCI) circuit is similar to a CCID5 with the differential current limit of max. 5 mA. The Underwriters Laboratories (UL) 943 Standard for Safety Ground-Fault Circuit-Interrupters is the GFCI standard that “applies to Class A, single- and three-phase, ground-fault circuit-interrupters intended for protection of personnel, for use only in grounded neutral systems in accordance with the National Electrical Code (NEC), ANSI/NFPA 70, the Canadian Electrical Code, C22.1 (CEC), and Electrical Installations (Use), NOM-001-SEDE. These devices are intended for use on alternating current (AC) circuits of 120 V, 208Y/120 V, 120/240 V, 127 V, or 220Y/127 V, 60 Hz circuits.” [UL 943 http://www.ul.com/global/eng/pages/solutions/standards/accessstandards/catalogofstandards/standard/?id=943_4]

The requirements for EVSEs are included in the National Electrical Code (NEC), Society of Automotive Engineers (SAE) and Underwriters Laboratory (UL). The primary purpose of the codes and standards are to reduce the risk of electrical shock to the user from live parts in grounded or isolated circuits supplying power to electric vehicles.  According to UL 2231-2 an EVSE developer has a choice of determining whether the EVSE will offer a CCID5 or a CCID20.  A level 1 EVSE, when plugged into a garage, will likely be plugged into a GFCI protected receptacle as mandated by the NEC.  Once plugged in, in most cases the GFCI will be functioning as personnel protection as well as the Level 1 CCID.  If the level 1 incorporates a CCID20 circuit, then the GFCI will likely trip first in all instances.

If an electrical engineer chooses to develop a CCID20, then a Ground Monitor/Interrupter (GMI) circuit is required to interrupt power to all circuit parts when ground continuity is measured above a predetermined threshold.  Note:  A GMI circuit is not required if the grounding circuit proves reliable after an evaluation of connections that are subject to flexing and if there is proven ability to conduct currents without damage to the grounding path. [UL 2231-2]

The contact monitor test was created within an EVSE to determine if the charging contactor is functioning properly following a transition from closed to open, or open to closed. If the contactor is transitioned to close (charging the vehicle), the monitor circuit will validate that there is continuity from line to load through each pole of the two pole contactor.   If the contactor transitioned from closed to open (stop charging the vehicle), the monitor circuit will validate an open circuit from line to load.

According to UL 2231-1 “When there is more than 15 Vrms, but not more than 300 Vrms between conductors with no conductor over 150 Vrms to ground, then a secondary protection mechanism is required in addition to basic insulation.”  The requirement can be satisfied by providing one of 5 options listed in the standard.

EVSE CCID circuits typically offer an auto reset feature that enables charging to resume, following a CCID trip, which is reducing the chance of being stranded in the morning with low battery power.  A typical scenario where the auto reset feature is beneficial is during a rain storm, and the CCID circuit nuisance trips in the evening due to short term leakage to ground caused by a path of condensation from line to ground.  A nuisance trip can be a onetime event, potentially due to a brief surge current, and the circuit is safe following the surge. If there is no auto reset, the EVSE will stop charging due to the trip and the vehicle will not be charged in the morning when an owner may want to go to work.  The auto reset circuit checks for a fault after 15 minutes; and if the power conditions are normal, the CCID will be automatically reset and vehicle charging will resume.

All CCID circuit designs do not operate the same.  It was recently found that high frequency noise measured on an incoming line wire could cause a valid safety issue and the potential for human electric shock. 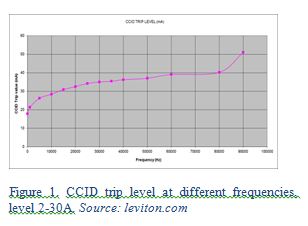 Fig. 1 demonstrates CCID trip levels versus frequency using a Leviton Level 2, 30A EVSE. The CCID circuit developed for EVSEs and exercised in the tests described is usually isolated from the main EVSE microcontroller.  The CCID is designed to function as a stand-alone circuit and it functions even if the main microcontroller has stopped functioning or locked up.

EVSEs offer many differing functional features, shapes, and varieties.  One key element of all EVSEs is the need to conform to the SAE J1772™ Surface Vehicle Recommended Practice.  The Recommended Practice provides the requirement for a common charge connector and for built-in communication that verifies a proper EVSE to vehicle connection prior to charging. Leviton endorses extensive testing directly with automakers in real-world and laboratory settings.  Not all automakers or EVSE manufacturers have interpreted the J1772 recommended practice the same way. Leviton believes that it is essential that EVSE and automakers collaboratively conduct testing and experiments to ensure compatibility.

Another safety feature built into EVSEs is called the Automatic De-Energization of Cable.  The requirement is described in Article 625.19 of the NEC [NFPA 70, 2011 Ed.]. The requirement states that EVSEs “shall be provided with an automatic means to de-energize the cable conductors and electric vehicle connector exposure to strain that could result in either cable rupture…or exposure of live parts”.  The EVSE must ensure that if the charge connector cable is pulled out of the EVSE or the cord insulation breaks, that live wires must be automatically de-energized rendering the EVSE cord safe to the touch.   The NEC requirement is a good one, however, here is a weakness in this requirement because it is not backed by an equivalent UL test procedure.  Usually, a requirement similar to this code requirement is accompanied with a UL test procedure, so that manufactures are required to perform testing to ensure compliance in the same manner.  The lack of test procedure is a weakness related to this requirement.

EVSEs can be mounted outside or inside a garage.  Due to the environmental protection required for outdoor use, most EVSEs are UL or Electrical Testing Laboratories (ETL)-listed with a National Electrical Manufacturers Association (NEMA) 3R or NEMA 4 enclosure.  The NEMA 4 protection is described as a “watertight” enclosure for indoor and outdoor use. NEMA 4 protection is strongly recommended due to the added protection from reduced contact surface oxidation.  Contactors typically incorporate a contact surface consisting silver-cadmium oxide. The silver-cadmium contact surface on the contactor could be degraded due to humidity or condensation accumulation within the enclosure or on the contacts.  A NEMA 4 watertight enclosure helps to prevent humidity and condensation from accumulating within the enclosure.  NEMA 4 is not required, but it is recommended for all Level 1 and Level 2 EVSEs.

In conclusion, there are many safety requirements and associated tests built into EVSE’s.  Some of the safety functions included are a CCID, a GMI, a contactor monitor circuit, overvoltage protection, overcurrent protection, automatic de-energization, and environmental circuit protection in the form of a NEMA-rated enclosure.   The CCID circuit is one of the most significant safety-related circuits. A designer must be careful to ensure that the CCID has a broadband implementation that will capture the leakage current caused by differential noise on the input lines with reference to ground. A GMI circuit, although not necessarily required, should be included in all Level 1 and 2 EVSEs to ensure that an adequate ground is in place from the EVSE to the facility service equipment.  Last but not least, a NEMA 4 watertight enclosure helps to prevent humidity and condensation from accumulating within the enclosure.  NEMA 4 is not required but it is recommended for all Level 1 and Level 2 EVSEs.

Kenneth Brown is Director of Engineering at Leviton’s Commercial & Industrial business unit. In that capacity Ken leads and team of engineers developing surge protective devices and electric vehicle supply equipment.   In the past few years Leviton has launched 7 different EVSEs designed and developed with the support of Ken’s team.  Ken chairs multiple standard related working groups including the IEEE “Surge Protection for Electric Vehicle Supply Equipment” and a NEMA working group entitled “EVSE Embedded Metering and Communication”.  Ken is Post Chair of the IEEE Surge Protective Devices Committee, a member of the UL 1449 & UL 2594 Standards Technical Panels, a member of NEMA and CSA. Ken holds an undergraduate degree in electronic engineering from the Ohio Institute of Technology and an MBA from West Coast University.