Design and Development of an eVTOL Passenger Air Shuttle

The Illini Air Shuttle is a student RSO at the University of Illinois at Urbana-Champaign focused on the design and development of a vectored-thrust tandem-wing electric vertical take-off and landing aircraft (eVTOL) for commercial transport. The current concept details a zero-emission aircraft that can travel a distance of up to 200 miles and will carry 10 passengers. The Air Shuttle concept was initially designed for rapid transport between large metropolitan areas such as Chicago and surrounding cities and towns like Urbana or Champaign. We expect the Air Shuttle to address limitations of existing methods of public transportation such as unreliable railroad systems and slow buses/shuttles.

This project was started during COVID-19 which presented us with a very unique set of challenges. The initial scope and goals of the Air Shuttle project were fairly turbulent during the early months as we were unsure whether to focus on furthering the conceptual design or focus on building a preliminary proof-ofconcept model capable of VTOL flight. Eventually, the group decided to split into two subteams, one group focusing on furthering the full-scale design and one group focusing on the construction and testing of a subscale model. At the beginning of this semester, another group formed to work on submitting a proposal for the AIAA/IEEE Student Design Competition. The pandemic played a major part in the organization of the club and the decision to split into subteams, as only a small group of people could meet in the lab to construct the model in compliance with COVID-19 protocols. The current dynamic of having three teams all working on different aspects of the same design has worked extremely well as team members, specifically the underclassmen, have much more input in design decisions which are then reviewed by the entire club on a weekly basis.

One way that we have been facilitating the knowledge transfer between the different groups and to underclassmen is by having weekly Tech Talks. These tech talks focus on one aspect of the RSO’s work and are presented by a new member each week in a quick and easy-to-understand presentation. Previous Tech Talks that have been presented include an introduction to permanent magnet synchronous motors and field-oriented control, urban air mobility infrastructure, and 3D printing technologies.

The design competition division of Illini Air Shuttle has been developing a design to submit to the AIAA/EATS Student Design Competition. The objective of the competition is to develop an eVTOL aircraft that can carry the highest payload while emitting zero CO2 emissions and meeting other design requirements. While the team is still in the early phase of the design process, the initial steps have been drawn out to develop and optimize a design. The first and most crucial step is creating an iterative process to optimize the maximum amount of payload weight based on three requirements: the maximum range the aircraft can fly, the maximum power the batteries can produce, and finally the maximum thrust the motors can create. The next steps are to determine the cruise speed and altitude as well as optimize climb and descent parameters to develop an accurate mission profile.

The full-scale group is focusing on maturing the current aircraft design shown in Figure 1. This work aims to validate the aerodynamic stability and power requirements of the aircraft. This work will be presented at the AIAA/IEEE Electric Aircraft Technologies Symposium (EATS) in August.

The full-scale team has divided up tasks into two subgroups: electrical and aerodynamics. The electrical group is working on building a dynamic simulation of a permanent magnet synchronous motor (PMSM) powered by a battery in Simulink. This will help generate the power system requirements based on the vehicle parameters such as mass, aerodynamic capabilities, and desired performance. The aerodynamics group is validating the aerodynamic stability of the aircraft by considering wing positioning, propulsion configuration, and planform dimensions. These haracteristics will be adjusted using a genetic algorithm that will iterate our design to optimize the aerodynamic performance of the aircraft in OpenVSP. 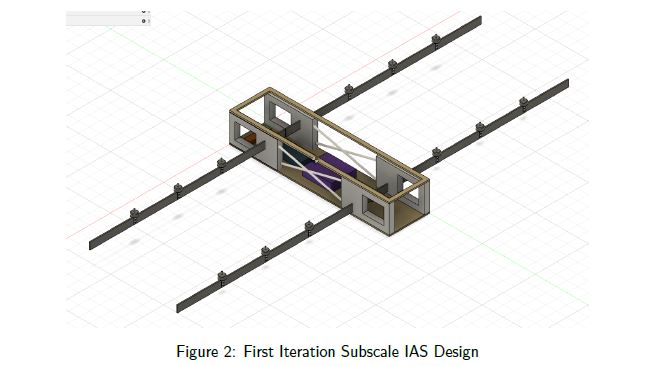 The subscale team within the organization has been working toward the design and construction of a proof-of-concept model of the current eVTOL design. As a new organization, the number of members was a limiting factor to the amount of work that each could take on. Despite a limited workforce, our team’s familiarity with collaboration over virtual meetings helped us accomplish the complicated task of creating a bill of materials for a type of vehicle that had been attempted only a handful of times. With a new semester and new members came an increase in productivity and new tasks to complete.

This semester, the subscale team has split itself into 3 facets to allow for better organization and collaboration: Avionics, Electrical, and Mechanical. The Avionics subteam is working to build the control systems for the aircraft using our chosen open-source autopilot system PX4. The Electrical team works to distribute power effectively across the motors and correctly implement all sensors, motors, wiring, and controllers. The Mechanical team is working to design and build a fuselage and wing system that is rigid enough to endure take-off and landing, but also large enough to hold all the necessary components. The Mechanical team has found many creative solutions to work remotely on their technical objectives. The most useful tool which enabled remote collaboration was the version control feature in the CAD software Fusion 360. Using this, the team has made many changes to the CAD model of the fuselage with feedback from other members of the team and the organization as a whole. The Electrical team has the most difficulty working remotely because of the necessity of physically connecting and running the electrical motors and components. The university and our mentor Professor Kiruba Haran have provided a limited capacity space to work safely on the electrical components of the project. The Center for Power Optimization of Electrothermal Systems (POETS) at the University has also allowed the subscale team to utilize their extensive lab facility in order to assemble the subscale model safely adhering to social distancing practices.

The subscale team expects to have a functioning first iteration scaled-down prototype of the eVTOL concept which will yield important data to design and manufacture a fully functioning Air Shuttle within the next few weeks.