MIT Solar Electric Vehicle Team: Continuous Innovation and Next Steps After the Pandemic

The Massachusetts Institute of Technology’s Solar Electric Vehicle Team (SEVT) was founded in 1985 by James Worden, who had fostered a passion and skill for building solar cars even before coming to MIT. Since then, our team has built and designed 15 single-occupant solar-powered cars from scratch. Unlike some other solar car teams, our team is entirely undergraduate students.

Our team is composed of three subteams: Mechanical Engineering, Electrical Engineering, and Aerodynamics/Composites. The Mechanical Engineering subteam works on the mechanical systems of the car, such as the suspension, steering, and brakes. Our Electrical Engineering subteam designs and constructs the electrical system of our car, which includes the motor, the solar panel array, and the battery. In addition to this, it analyzes many different data sets of our car’s performance during the race in order to maximize energy usage. The Aerodynamics/Composites subteam designs and manufactures the outer shell of the solar vehicle in order to minimize air drag around the vehicle. 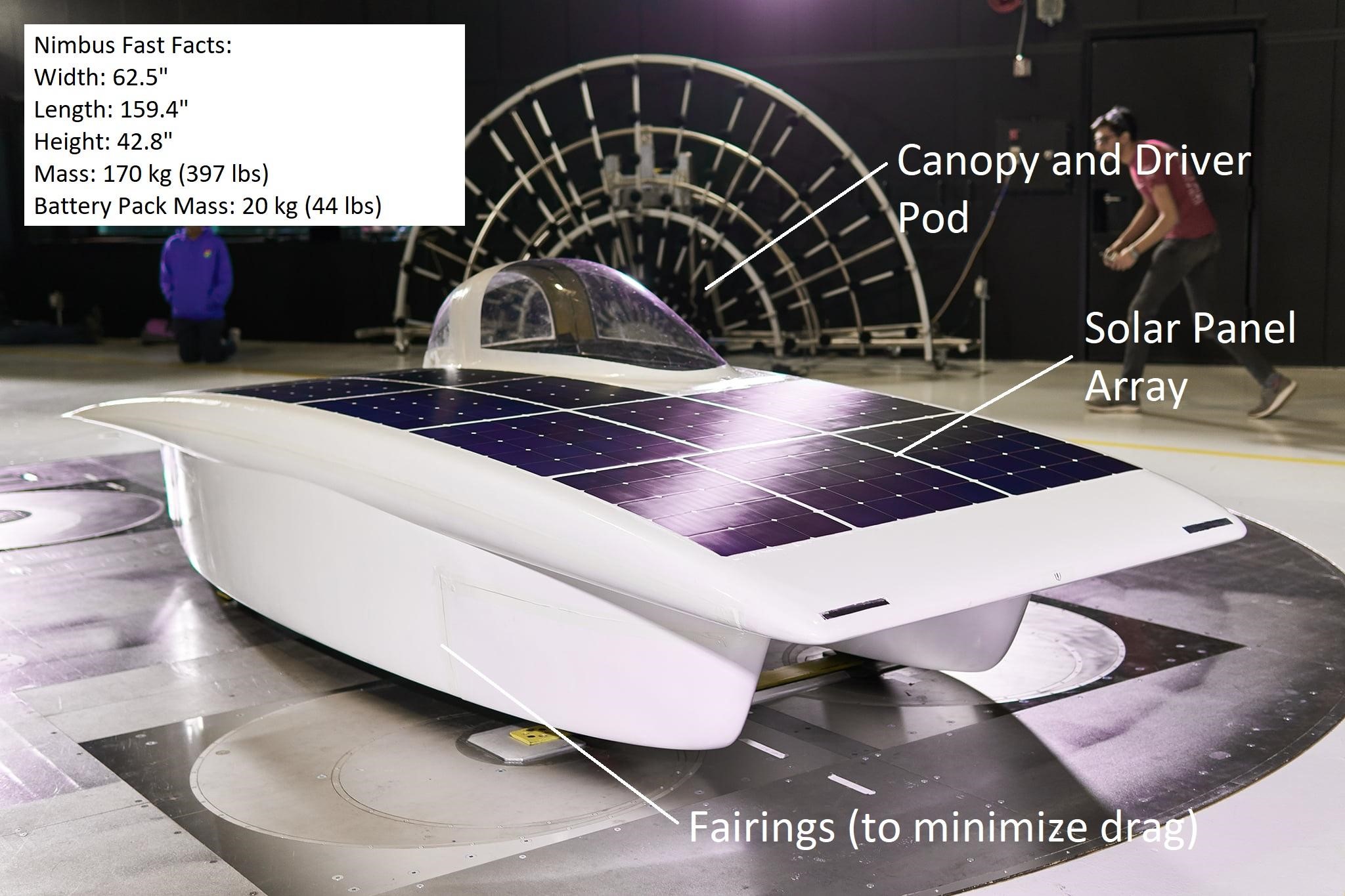 Caption: SEVT’s current project: the single-occupant vehicle “Nimbus,”
which was begun in 2018 and will race in this year’s American Solar Challenge.

Our team creates our cars in a two-year period, where we design the many different components of our car in the first year and construct it in the second, in order to race it the following summer. Additionally, SEVT provides a supportive and informed community for students to learn engineering principles and team dynamics. However, the COVID-19 pandemic sent our members away from each other and Nimbus, which sat unfinished in our shop for almost a year. In the summer and fall of 2020, SEVT’s leadership had to make decisions for the future without knowing what the future would actually look like.

Due to COVID-19 shutdowns, the 2020 American Solar Challenge was moved to 2021, which disrupted the two-year timeline our team normally operates upon. SEVT’s leadership was faced with a difficult choice. The next ASC was still in 2022. “If we did do a single-occupant vehicle, we would have to do it in this one year turn around...or do it in three years,” says Christopher Kiel, SEVT’s current Systems Lead and a rising senior in Materials Science and Engineering.

Development of the next single-occupant solar car began. However, “it really just came to the point where it seemed that no one was particularly thrilled about making a single-occupant vehicle,” continues Kiel. One of SEVT’s main goals is to “facilitate continuous innovation and development in all fields related to solar electric vehicles,” and we felt that the true innovation and challenge of the team could only be accomplished by moving to the development of a more complex and detailed vehicle. “While there will be learning opportunities doing another single-occupant vehicle, it will more just be maintaining the status quo than actually pursuing something bigger and greater,” says Kiel. Therefore, SEVT made the decision to race Nimbus again in ASC 2022, and design and manufacture a multi-occupant vehicle (MOV) to race in the 2023 Bridgestone World Solar Challenge. With this decision, SEVT entered a new realm of innovation within solar car production. MOV design is a newer field: international competition of MOVs began only eight years ago.

A MOV and its design and manufacturing is much more similar to the engineering of a typical, gas-powered car. MOVs can have masses up to 500 kg, which is almost triple the 180 kg mass of Nimbus, a single-occupant vehicle. Kiel says, “I'm excited for the fact that there will be a particular emphasis on the design of things that are not made out of metal...With a MOV, particularly for some of the interior, we're going to have to put a much heavier emphasis on other types of manufacturing and materials processing.” For our past solar cars, the mechanical engineering subteam has primarily worked on systems composed of metal pieces, from brakes to suspension. With a MOV, our team must design a car interior that is similar to the interiors of gas-powered cars. Materials like plastic, fabric and vinyl will be prominent in a MOV and will require new approaches to the engineering process for our members. In contrast to this, Nimbus’ cockpit interior is made of hard aluminum and carbon fiber composite material, and the driver enters and exits by opening the canopy and pulling themselves up out of the car.

When asked what he considers the primary difficulties in design a MOV, Kiel answers, “The difficulty is that nobody is going to know what the heck they're doing, even more so than usual. There needs to be at least someone or some people that have a strong vision in mind or are moving towards that vision and unless that happens the car is not going to get made or it's not going to be a good car.”

Julian Zanders, the 2021-22 Electrical Engineering Lead and a rising junior in Electrical Engineering and Computer Science, identifies how MOV design is more detailed and intensive. “I view the two largest and most interesting changes for the MOV as being the increase in power and designing for practicality. We'll need to use a larger battery box and more solar panels to provide this extra power, which will require reevaluation and recalculation of our high-power stage.” The increased size and weight of a MOV require more power from its electrical system so that its motors can move it forward. According to current ASC regulations, MOVs may have up to 5 m2 of Silicon-based solar panels, compared to the 4 m2 a single-occupant vehicle can have. And while single-occupant vehicles must constrain their batteries to be a certain weight, no such restriction exists for MOV racing.

With a larger interior comes more opportunities to add comfort and leisure features that cannot be fit in the cramped driver’s pod of a single-occupant vehicle. As Zanders says, “The part I'm most excited about is the design for practicality. Part of judging for the MOV involves evaluating the car for practicality, comfort, et cetera, which gives us a wonderful excuse to add a bunch of bonus features and amenities to the car that we wouldn't have included otherwise. Things like windshield wipers, cigarette lighters (for charging electronics), audio systems, radio, Bluetooth connectivity, blind spot sensing, lane departure sensing, and whatever else we might think of.”

Designing a multi-occupant vehicle is a fitting and exciting next step for SEVT. Solar car design and racing have helped to prove the efficiency and everyday applications of solar energy. As we continue to innovate, we are working not just for the sake of our personal project, but for the widespread use of new and sustainable technologies. 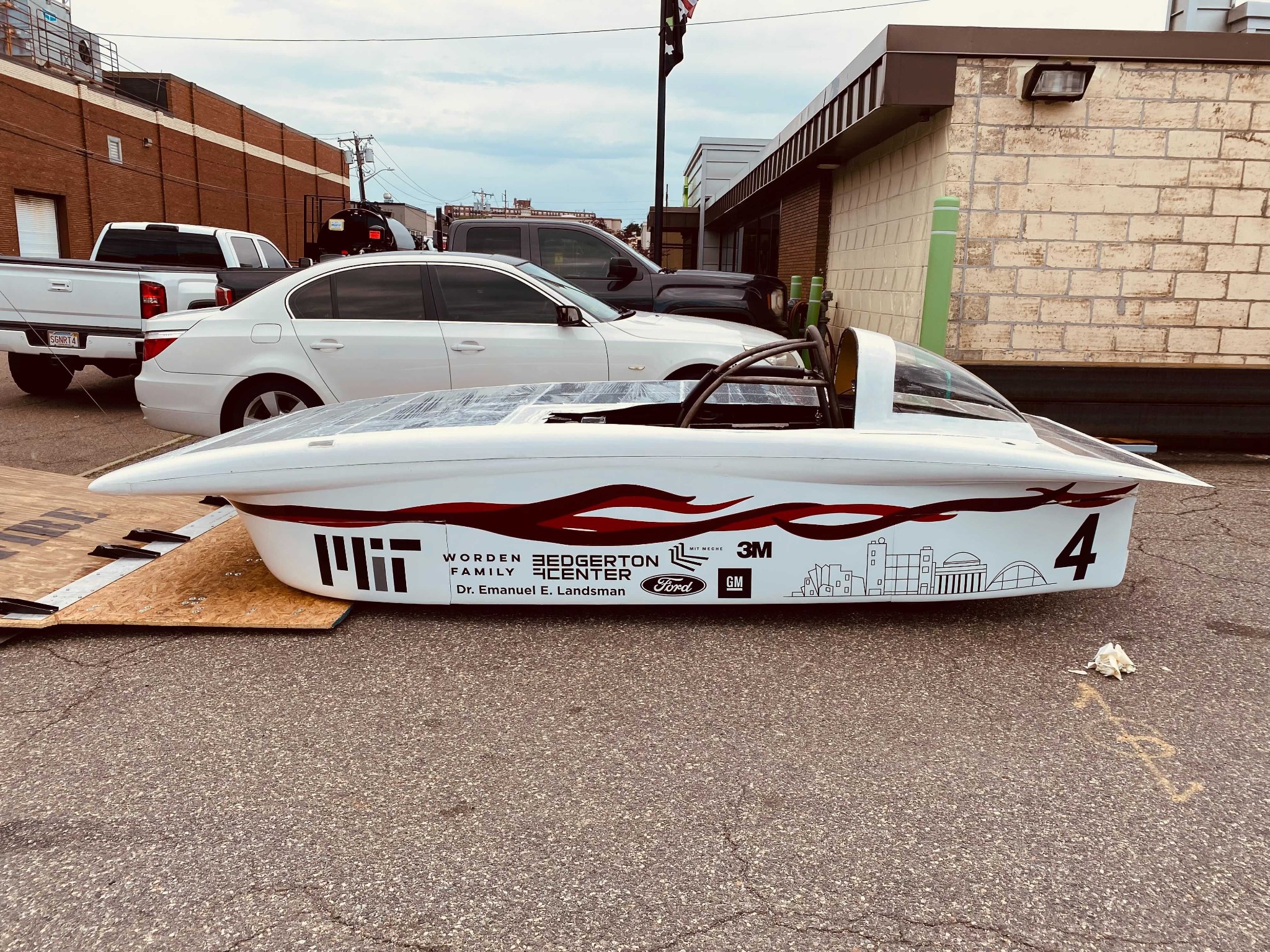 Caption: A view of Nimbus in June 2021, one month before the American Solar Challenge.