The charging infrastructure is the backbone of electric mobility. A substantial volume of investment is necessary to create the infrastructure for an electric bus (e-bus) fleet. Hence, understanding the charging demand and preferences of a public e-bus fleet is critical to make the investment worthwhile. Moreover, electric mobility is unique from the rest of the road transportation modes since its implementation is inextricably linked with the electricity distribution sector.

AEEE undertook a study “Charging India’s Bus Transport” to provide definitive guidance to the bus service providers and equipment manufacturers in setting up charging infrastructure for an intra-city e-bus fleet in India. The study finds that the success of the e-bus transport depends on several factors such as the technical specifications and the cost of different charging technologies, the available electricity distribution network, the current e-bus specifications, the intra-city bus operation characteristics and the charging infrastructure space requirement. The first thing to assess is the possibility of charging.

Three important questions that need to be answered while planning charging infrastructure for an e-bus fleet are when, where and how to charge the bus as shown in Figure 1. 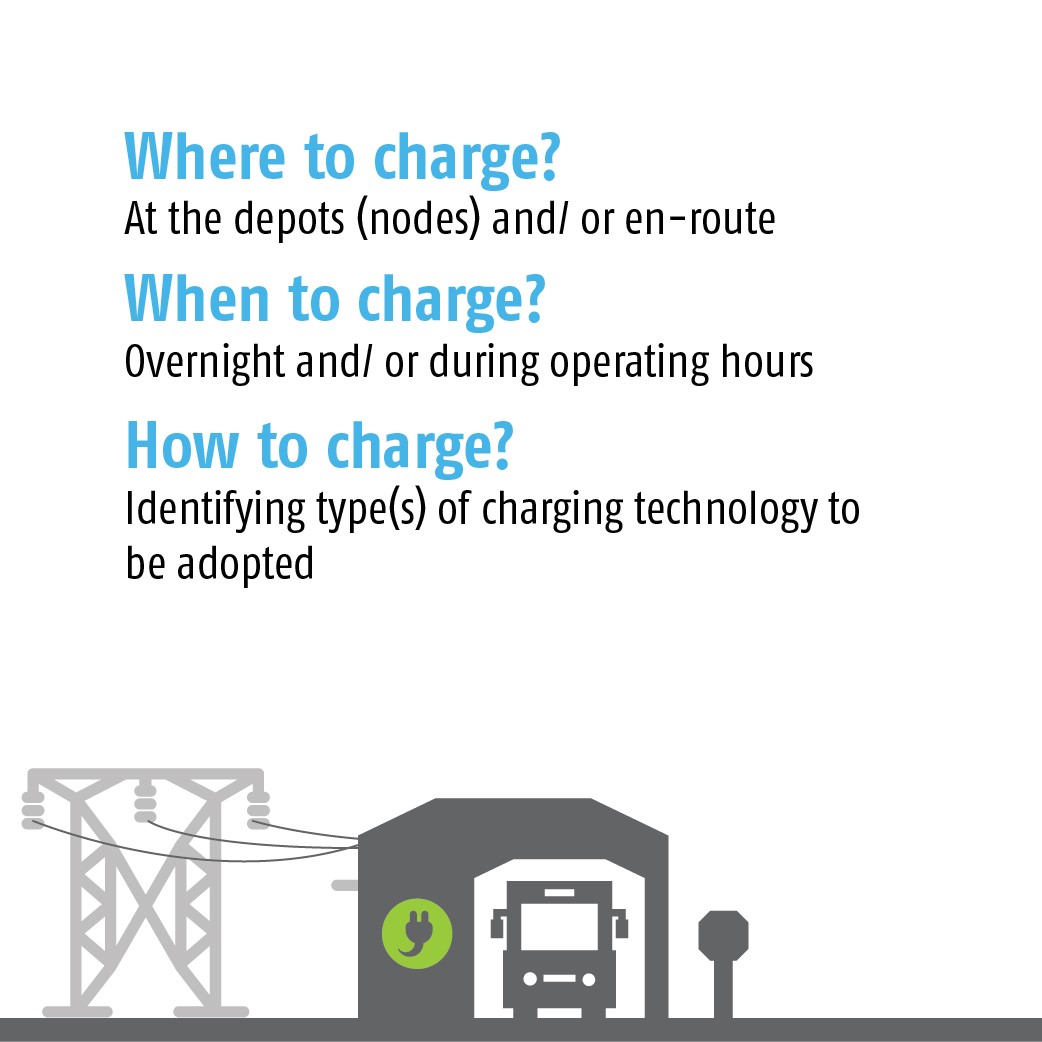 To answer the first query i.e., where the siting of a charging station for an e-bus fleet should be, the following factors (refer to Figure 2) are important.

Figure 2: Important factors on where to charge the e-bus fleet

Considering these factors, the origin and destination nodes (depots or terminals) could be the potential primary sites for setting up charging stations for an e-bus fleet on a route. The bus service provider could also consider en-route charging at an intermediate charging station (between origin and destination nodes) to replenish the bus fleet with sufficient charge to reach the destination node if a case arises where the range of the bus may not be adequate to make the trip. However, in such a case, because of charging time, the duration of the halt would get more prolonged than usual, and this would negatively affect the service frequency of the route. Hence, an intermediate charging station should only be considered when the range of the e-bus is not sufficient to cover the entire route length.

Route lengths are a critical factor for planning the establishment of charging infrastructure for an e-bus fleet. When the study assessed the longest and shortest bus routes of the Tier-I and Tier-II Indian cities, it finds that the root-mean-square (RMS) of the intra-city bus route lengths is about 33 km (in a single trip).

Since the cost of a battery accounts almost 50% to 60% of the cost of an e-bus, the study in its bid to explore the possibility of adopting a lower battery capacity for an intra-city e-bus fleet, analysed two battery capacities - 100 kWh and 200 kWh, which are the other battery options for e-buses currently. To start with, one should bear in mind that the rated battery capacity, which is the total amount of energy that the battery contains, in practice does not correspond to the total energy available for usage; the primary reason being the limit up to which a battery can discharge i.e., the maximum depth of discharge (DoD). Of the available energy, it is recommended that the battery of an e-bus should never be discharged below 15% to avoid any possibility of getting stranded as shown in Figure 3.

One can estimate the corresponding driving ranges of an e-bus against the given rated battery capacities. From the mileage data of the existing e-bus models, the study finds that the maximum and the minimum values for energy consumption per km are 2 kWh and 0.83 kWh respectively which, in turn, indicate that a battery rated 100 kWh would allow an e-bus to travel a maximum distance of 74.4 km and a minimum distance of 29.8 km. On the other hand, a 200-kWh battery powered e-bus would offer a driving range between 59.5 km and 148.8 km.

As the estimated minimum possible driving range of an e-bus is about 59.5 km which is greater than the RMS route length (33 km) by a comfortable margin, the e-bus would be able to complete a trip successfully without requiring a charge en-route. As any need to charge an intra-city e-bus fleet between the origin and destination nodes is not envisaged, it is not necessary to set up intermediate/ en-route charging stations.

Thus, the bus charging will happen at the depots which can be attended post-completion of trips during the operating hours of the bus transport network or overnight when the bus transport pauses for hours. The role of overnight charging is to reduce the requirement for charging during operational hours of the bus fleet and thus, to ensure that the charging time does not negatively affect the service frequency of the concerned route. The charging technologies associated with e-buses are shown in Figure 4.

Framework for evaluation of required charging capacity at a depot

To assess the requisite charging capacity at a depot, i.e., the number of EVSEs to be deployed at a depot for a route, the study proposes a framework in the form of a set of relations involving some critical operational parameters. In developing the framework, the study sets some important objectives to accomplish as shown in Figure 5. 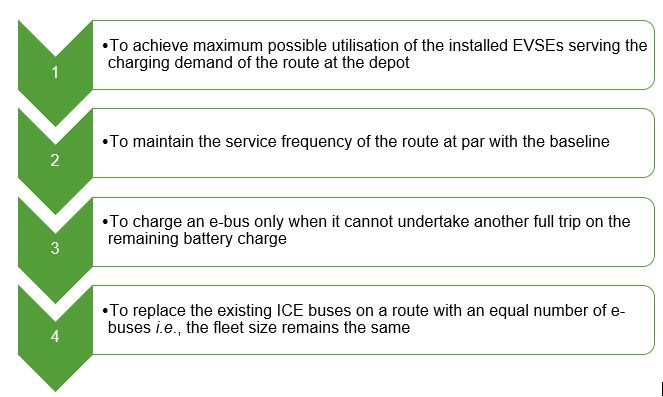 The hallmark of the framework is the formulated relations take into consideration the critical operational parameters which potentially impact the effectiveness of the intra-city bus service on a route post electrification. The parameters that need to be considered include the time headway of a route operating from the concerned depot and the time headway of the route (served by the same depot) with the highest service frequency, the length of the route from the origin to destination depot, the number of trips completed by the e-bus before charging is required, the rated output power of an e-bus charger, the energy consumption per kilometre of the e-bus, the effective charging time for an e-bus, and the ratio of the total time designated for charging e-buses in a day to total daily operating hours of the bus network. Case-studies performed to test the usefulness of the framework to determine the optimal charging capacity for intra-city bus fleets in India would be presented in a later article.