China’s first “Special Economy Zone” was established in ShenZhen as a result of the policy of “reform and opening” in 1979.  When visiting these zones in China today, it is highly likely that you will have the pleasure of a taxi ride in one of the over 1,000 electric taxi’s currently operating in ShenZhen.  In fact, the municipal government of ShenZhen has an ambitious plan to replace all local petroleum-fueled taxies with pure electric ones over the next five years.  Moreover, the plan calls for replacing half of the total 16,000 rapid-transit city buses with zero-or-low-direct emissions ones (electric-driven or hybrid) by the end of 2015.  ShenZhen has become China’s National template for “low-carbon cities”, and leads the world in the largest electric-vehicle fleets for public transportation (nearly 1,000 eBuses, 1,000 eTaxis and over 500 ePolice vehicles) [1-4]. 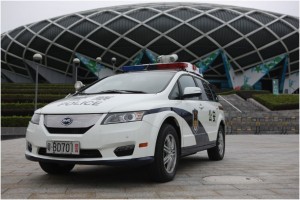 The rapid development of EVs in ShenZhen is due to strong local and National governments support as well as an intensive cooperation between EV manufacturers and local power utilities (the Southern China State Grid).  In recent years, a number of new policies and standards in favor of EV development have been formulated including, “new energy bus and car system standards” [5], “Shenzhen’s new energy bus operation monitoring system standard” [6], etc. This contributes significantly to the formation of the EV industry in the whole Pearl River Delta region (including ShenZhen, Dong Guang and Hong Kong).  As a result, many EV related industries have been established and headquartered in ShenZhen, such as GreenWheel, Shenzhen Futengda, Wuzhoulong Motors and BYD Ltd company, one of the largest technology providers for EV-based taxis, buses and private cars in the world now.

The municipal government of ShenZhen regards EV development as a major step towards economic recovery, in conjunction with low-carbon and sustainable city development and therefore, took initiatives in planning and developing various EV friendly infrastructures. For example, by the end of 2012, over 114 large-scale charging stations for public buses had been constructed and combined with the bus interchange stations in the city.  Meanwhile, the city has installed EV charging access in 5% of residential and 10% of all public parking lots during the same period.  To facilitate EV development the local power utility, China Southern Power Grid Co. Ltd (CSG), supported various EV charging infrastructure installations and incentives in ShenZhen.  Nearly three thousand charging posts for EV passenger cars have been erected in public and residential areas so far.  As a major economic incentive for particularly private ownerships, EV owners in ShenZhen receive a special discounted price for charging services at the similar level for the non-peak loads in the service region of CSG. Moreover, CSG offers to construct dedicated charging posts for private EV owners at both their residential premises (upon request) and their workplace (two free charging locations!) [2]. It is understandable that fast development of EVs may impose challenges for local power grids in many aspects, such as significantly increased or even congested power flows and losses.  However, in collaboration with local and external partners, several research and demonstration projects have been undertaken by CSG to investigate the feasibility of the solutions from planning and operational perspectives. Meanwhile, ShenZhen government has initialized several public outreach programs on the optimal operation of power grids with EVs, where the author of this article has been involved.

Another important city in Pearl River Delta, Hong Kong, has been actively investing into EV development. Various research and development projects on EVs have been initialized by utilities and universities in Hong Kong. One of the two local power utilities, China Light and Power (CLP), has erected 33 standard/semi-quick and 6 quick charging stations in New Territory and Kowloon areas by December 2012. 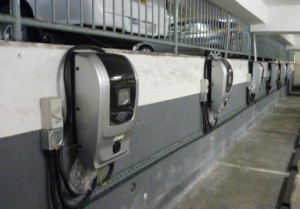 In 2009, the Hong Kong Polytechnic University and EuAuto Technology Limited launched Mycar, the first home-grown electric vehicle in Hong Kong [7]. The car has obtained a World Manufacturer Identification code and is fully compliant to European standards.  It is for sale in the UK, France, Italy, Austria and Denmark.  On May 16, 2013, The Hong Kong Electric Company Limited placed into service the first batch of 45 all-electric, zero-direct emissions BYD eTaxis.  Mr. John Tsang Chun-wah, the GBM, JP, Financial Secretary of the Hong Kong Special Administrative Regional Government welcomed BYD to Hong Kong and reaffirmed his commitment to “promoting environmental sustainability by laying the foundation for Hong Kong to become a zero emissions city” [8].

While fast EV deployment is ongoing in the Pearl River Delta, some difficulties have emerged such as limited EV battery capacity resulting in lower customer acceptance, and the high costs of subsidies by governments for EV promotion.  Currently, a pure battery EV can receive a subsidy up to RMB 60K (~US$10k) from the National Government depending on its driving distance per single charge  This subsidy is matched by local municipal governments in ShenZhen (for a total of up to RMB 120K (~US$20k). It is believed that without the subsidy, EV deployment would significantly slow down in China. Further, the total EV promotion costs need to be thoroughly evaluated to include not only the subsidies, but also the construction and operation costs of charging infrastructures, and the costs of recycling of used batteries in the coming years. There are other difficulties arising from inappropriate planning and design of EV infrastructures that lead to inconsistencies between government plans and actual market needs.  Shenzhen has 6 public charging stations and 197 charging poles designed specifically for eTaxis as well as fast charging vehicles with DC charging services.  According to CSG, the current ratio is 1 charging post to every 3 EVs but eTaxis drivers frequently complain about inadequate charging facilities and uneven distributions of these facilities within the city. On the other hand, there are always available charging posts for private electric cars located in e.g. parking and private residential areas, which indicate the market potential of private electric cars has been overly optimistic in Shenzhen.

To resolve the aforementioned challenges, continuous technology development as well as customer education is necessary to bring down the EV costs and improve the market acceptance. Coordinated planning and design of charging infrastructures to meet the actual needs of different EVs and drivers must be pursued. Meanwhile, to give out reasonable stimulations, it is also necessary to timely adjust subsidy schemes, which should not be overly high for sustainable development. And last but not least, comprehensive cost assessments for EV deployment is of high importance to guide relevant technological and industrial developments, including not only the installation and operation costs of EVs and charging infrastructures, but also the costs due to battery recycling in the long term.

Electric vehicles will provide enormous benefits to society and to the public, enabling sustainable and environmental friendly development in the long run. Many local and national policies have been in place to stimulate deployment and research activities in South China. Based on recent advancements on EV development in the Pearl River Delta, and the lessons learnt in relation to charging infrastructure and subsidy program, it is believed that strong government policy support and incentives for public entities have worked well to materialize EV growth in this region, although emerging difficulties could slow deployment.

Zhao Xu is a Senior Member, IEEE. He received his B.Eng., M.Eng, and Ph.D. degrees from Zhejiang University, China, in 1996, National University of Singapore, in 2002, and The University of Queensland, Australia, in 2006, respectively. He is an Associate Professor with The Hong Kong Polytechnic University. From 2006-2009, he was an Assistant Professor and later an Associate Professor at the Centre for Electric Technology, Technical University of Denmark, Lyngby, Denmark. His research interest includes demand side, grid integration of electric vehicles and wind power, electricity market planning and management. Dr Xu has led and participated in several large scale research programs on electric vehicle and renewable energy including the EDISON project in Demark and the Theme Based Project-Solar Energy Harvesting, Storage and Utilization sponsored by HK Research General Council. He is now serving as an Editor for Electric Power Components & Systems Journal.