by Robert A. Taylor and Chia-Yang Chung

With the rise of Tesla, electrical vehicles (EVs) are becoming a popular alternative to conventional internal-combustion-engine (ICE) vehicles.  A recent International Energy Agency (IEA) report projects 20 million passenger EVs will be on the road by 2020 [1].  Of course, EVs do have some limitations – namely cost, driving range, and recharge time. These and other issues have hampered their widespread adoption.  Another, often overlooked, issue is that auxiliary systems such as cabin heating and cooling can significantly diminish the driving range if the vehicles’ batteries power them. According to one study [2], HVAC systems gulp down almost one third of the EV’s total energy reserves at cruising conditions.

Thus, on a cold day, instead of driving straight from Pittsburgh to DC, you might need to stop somewhere in Pennsylvania for several hours to charge up.  Pittsburgh to DC is 240 miles, which is just inside the range of the Tesla Model S.

Conventional vehicles provide cabin heating by utilizing a fraction of the waste heat from the ICE. Electric motors, on the other hand, provide little waste heat, converting most of the battery’s energy to mechanical motion. As an alternative, researchers at University of New South Wales (UNSW), Australia, have been working on a low-cost ‘thermal battery’ that will not drain an EV’s range.

In a thermal battery, heat (or cold) can be stored, charged, and discharged in a manner similar to an electrical battery. There are essentially three types of thermal storage to choose from:

In order to be a viable alternative, a thermal battery needs to provide comparable specifications, at a lower cost, than the EVs’ batteries. Lithium-ion batteries are the technology to beat with their high specific energy (392 kJ/kg) and energy density (784.8 kJ/m3) [3].

Sensible materials, such as water, are widely available and of low cost, but their energy densities are nowhere near lithium-ion batteries.  Thermo-chemical energy storage can provide high energy density, but could cost a lot more than lithium-ion batteries.  Thus, the latent heat storage of phase change materials (PCMs) provides the highest potential.  For PCMs, the key properties of interest are the following:

• The phase change temperature – For effective heat transfer, the phase change temperature should be higher, but not too much higher, than the required output temperature.
• Latent heat capacity (kJ/kg) – This specific energy value should be comparable to batteries as portability, i.e. minimizing size and weight, is of prime importance.
• Thermal conductivity (W/m-K) – Thermal conductivity of the material directly relates to its charging and discharging rates.
• With these in mind, it is relatively easy to create a short list of PCMs that are suitable for an EV thermal battery, particularly for heating. These data are shown in the table below.

In the recent study at UNSW [4], erythritol was selected as the PCM for developing a thermal battery prototype. Erythritol, a sugar alcohol, is interesting because is a mass-produced artificial sweetener (read: low cost) and has little negative environmental impacts.  Besides tasting great, it also has a latent heat capacity close to that of a lithium battery and a high thermal decomposition point of 160C  [5], allowing it to store relatively high quality thermal energy.

The prototype built and tested at UNSW incorporated 16 kg of erythritol in an insulated stainless steel container. Heat was extracted from the thermal battery via an imbedded ½” copper tube, formed into a helical coil to obtain maximum contact area with the PCM and good mixing of the heat transfer fluid. Experimental testing included a flow loop with a radiator and a fan to simulate heat delivery to the passenger cabin. Water and oil were tested as potential heat transfer fluids flowing between the battery and the radiator. The following figure shows the temperature at different heights within the prototype during testing. As can be seen, the thermal battery was initially heated (charged) to a 135 C. When the fluid first runs through the thermal battery, the temperature quickly decreases. At approximately 118C (erythritol’s phase change temperature), the battery slowly solidifies from top to bottom. After this, the temperature starts to decreases again and continues to release sensible heat. 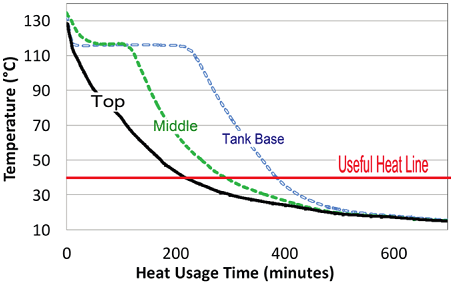 While this work was focused on the performance of the prototype, it should be noted that in the real application, thermal batteries could be recharged through any combination of the following:

• Embedded heaters that charge when plugged into the grid or from the vehicle’s waste heat (e.g. braking)
• Solar collectors – either incorporated into the vehicle or at parking sites.
• Battery exchange (charged by external sources).

Weighing in at just over 20 kg (45 lbs) and costing about $310/kW-h to build (roughly ½ the price of lithium-ion batteries), this single module (which could be combined in series or parallel with others) is capable of providing enough heat for 1 hour while cruising on the highway in a standard vehicle on a 10 °C (50 oF) day. It can store nearly 100 W-h/kg and can provide a specific power density of 30 W/kg (both of which are competitive with electrical batteries) as is shown in the figure below. The thermal battery prototype does have a considerably shorter shelf life and take up more space, due to the insulation layer, than lithium-ion batteries. 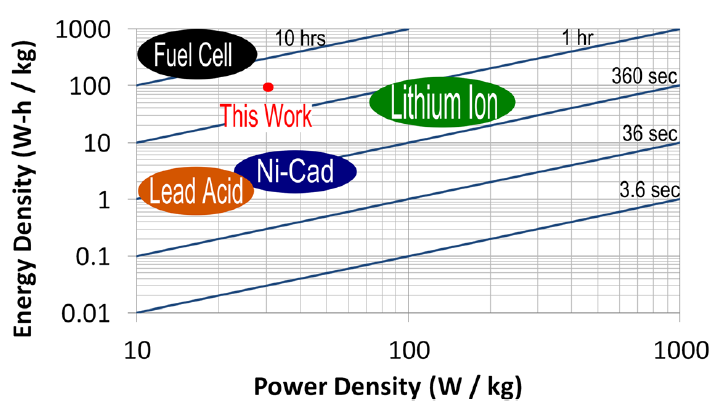 As a commercial product, the design could certainly be further optimized, but the prototype module proves that this technology is feasible. Since the thermal battery offers a similar energy density at a lower cost, it enables improved EV driving range without additional electrical battery capacity. For more information on the design, see the full academic paper [4] in the ASME’s Digital Collection.

Dr. Robert Taylor is currently a Senior Lecturer at University of New South Wales, Australia, in the School of Mechanical and Manufacturing Engineering and School of Photovoltaic and Renewable Energy Engineering. Dr. Taylor’s main research interest is in the development of ‘next generation’ solar thermal collectors. Drawing on the fields of heat transfer and nanotechnology, he is researching new/novel working fluids and materials for solar systems.  In essence, the main goal is to provide a more efficient or more economic coupling between solar energy and useful thermal and/or electrical energy.