Thermal runway (TR) is one of the major problems associated with Lithium (Li) ion batteries. In technical parlance, it is also known as the “venting of flame”, with the temperature playing a significant role. The operating temperature of the Li-ion batteries ranges from +15 and +45ºC. It is imperative for the battery to function within this range as otherwise; it may compromise the functional safety of the battery, the full vehicle system well as the electrical accessories. TR happens when the temperature goes above the critical level and results in an unstoppable chain reaction. There is a steep increase in the temperature in a very short interval of time (in milliseconds) leading to a sudden release in the energy stored in the battery. Temperature magnitudes close to 400°C are created, making the battery gaseous, resulting in fire eruption which is not extinguishable by traditional methods. At temperatures close to 60°C, there is an increased risk of a TR which would be extremely critical at 100°C. TR in Li-ion batteries can be caused by various sources like mechanical, electrical, and thermal abuses. This results in smoke emerging out and finally, the battery catches fire. The fire propagates to its neighboring cells and causes an explosion. Fig. 1 depicts the different causes and the effect of thermal runaway in Li-ion batteries.

Effects of thermal issues on TR

Heat in Li-ion batteries occur due to the loose connection of the cell connector. This is usually observed in Hybrid Electric Vehicles (EHV) due to (a) manufacturing defect (b) vehicle vibration. This heat generated spread over wide area causing TR. This phenomenon aggravates when currents of higher C rates are used for charging and discharging. The excessive heat generated travels to the core region of the battery and causes TR. Developing efficient battery thermal models play a vital role in implementing a robust thermal management system. In the recent past, there have been several instances of Li ion battery explosions resulting in property and body damages. In the conventional Li ion batteries containing liquid electrolytes, the separator and the electrolyte are less tolerant to increasing temperature than the electrodes and current collectors. Due to the high temperature inside and / or outside the Li ion battery, the health of the battery degrades in terms of lowered capacity and increased internal resistance.

Internal Short Circuit: The most common effect of TR is the internal short circuit (ISC). The short circuit occurs when the anode and the cathode come in contact with each other due to the battery separator failure. The electrochemical energy gets released spontaneously in addition with the heat generation. In general, ISC is triggered due to mechanical, electrical and thermal abuses. A new ISC which is yet to be explored is the Spontaneous ISC which is believed to occur due to the deformities / contamination formed during the manufacturing process. This ISC is a long lasting and complex mechanism to be examined. It is suspected that the failure of Boeing 787 is due to the Spontaneous ISC. Fig. 2 shows the different causes and the effect of TR in Li ion batteries.

External Short Circuit: An external short circuit happens when there is physical deformation of the battery.

Battery Overcharging: In case the battery is overcharged above the maximum voltage specified, for the purpose of range extension of the electric vehicle, would lead to a permanent damage of the battery and reduction in the service life. 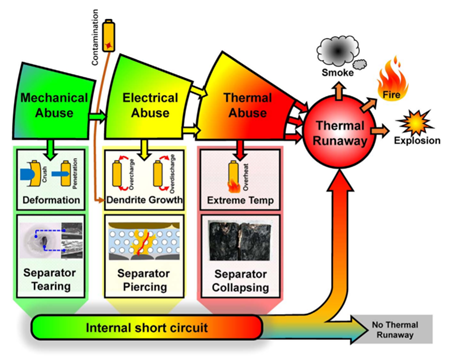 Functional Safety and its relationship with thermal runaway of the Lithium-Ion Battery (LiB):

In general, automotive industry follows ISO 26262 standard for functional safety and it contains 12 parts. In part 10, section 12, it provides guidance for system development with safety related availability requirements. In this context, safe state can be achieved by switching off the functionality in case of a malfunction within the system and the safety goal to be achieved. For transportation solutions, failure mode effect analysis (FMEA) and fault tree analysis (FTA) are the common techniques to analyze the faults. FMEA performs the inductive approach and considers the individual faults. FTA performs the deductive approach and considers the combinations of multiple faults. Both FMEA and FTA provide the safety analysis with top-down and bottom-up approach. To avoid thermal runaway the systems cannot be simply switched off, as the safety system should tolerate a fault for a certain period of time. Functional safety standard addresses the detecting faults malfunction faults and communication failures to avoid hazardous events. Based on hazard analysis and risk assessment (HARA),

a) Hazards identification,
b) Hazardous event, and
c) Classification of the identified hazardous event will be done. It leads to appropriate classification of Automotive safety integrated level (ASIL) grade means ASIL A, ASIL B , ASILC and ASIL D. where ASIL D > ASIL C > ASIL B > ASIL A.

The authors declare no conflict of interest. No data / information from Bosch Global Software Technologies (BGSW) were used for this work.