Legislative frameworks are becoming increasingly stringent due to global warming. As a result, there is pressure on the transportation industry to reduce fuel consumption and average CO2 emissions. This has led to a two-pronged approach: development of advanced electric drive propulsion system technologies for vehicle powertrains, and advanced testing methodologies.

Hybrid Electric Vehicles (HEVs) have been explored significantly as an option to reduce emissions and fuel consumption. Conventional vehicles provide comparatively poor fuel economy and most pure Battery Electric Vehicles (BEV) can have difficulty meeting power and energy demands, amongst other challenges. HEVs are thus an appealing option because they provide adequate drivability while reducing emissions and fuel consumption. However, one challenge of HEVs is that the control strategy to optimize energy consumption can be extremely complex. And in addition to increasing vehicle complexity, testing complexity in the form of real-world driving and real driving emissions (RDE) is also gaining traction [1].

The Energy Management System (EMS) in HEVs involves two set of tasks: component level or low-level control tasks and supervisory level or high-level control tasks. The supervisory controller plays a vital role in optimizing the operation of the powertrain, which deals with the balanced generation and use of stored energy to reduce the overall energy consumption while taking into account system constraints and drivability. Some of most critical EMS tasks include determining the power-split between engine and electric motors and transitioning between different powertrain modes such as pure engine, hybrid and electric mode. Control strategies that perform these tasks fall into two categories: rule-based controls and optimal controls.

Rule based controls involve defining a set of heuristic rules to control the powertrain states and resulting power-split. Optimal Controls can be subdivided into local optimization methods, which provide sub-optimal results, and global optimization methods, which provide absolute-optimal results. Dynamic Programming (DP) is the global optimization method discussed in this paper. While DP has been studied and implemented in other research, the novelty of the work in this paper involves the implementation of DP in a generic manner, making it applicable to any vehicle architecture. Moreover, the presented methodology leads to significant reduction in computational cost through the use of parallel computing.

Figure 1 shows the real-world driving route from Navy Pier in Chicago, IL to the Gamma Technologies headquarters in Westmont, IL. This route contains several pieces of critical information when evaluating real-world driving performance: start and end locations, intersections, and traffic signal locations. Based on aforementioned route, a speed target was generated which is a function of distance traveled. The route represents the mean traffic speed along the route at the time the route was generated. This allows for evaluating fuel economy and energy usage depending on the time of day, traffic density and so on. 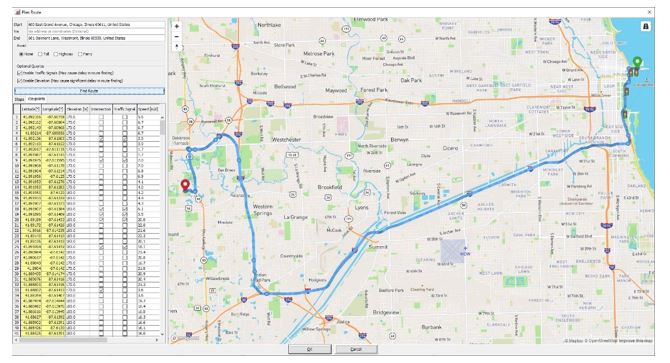 Dynamic Programming in a Nutshell 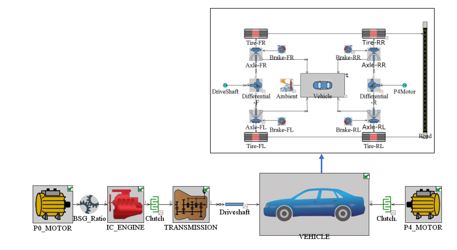 The implemented deterministic DP algorithm is based on Richard Bellman’s principle of optimality [3] and it is a numerical method of solving a multistage decision-making process. This requires a-priori information about the entire optimization horizon, a real-world drive cycle in the case of the present study.

The computational cost of optimization using DP algorithm is a strong function of the number of design/control scenarios analyzed and can become very high as this number grows.  In order to speed up the calculation process, DP solution was parallelized and distributed over multiple processors. Figure 5 shows run time metrics for the FTP-75 driving cycle for serial vs parallel run. A 91.11% reduction in simulation duration was obtained as a result of parallelization.

The model of P0/P4 hybrid was analyzed using the commercial software package GT-SUITE, a multi-physics simulation platform that enables seamless integration between various physical domains and allows for rapid virtual prototyping of all hybrid-electric vehicle architectures. Figure 6 shows the adaptability of an optimal control solution to powertrain architecture. The time involved in developing system and component level dynamics and integrating physics with controls can be lessened by using the implemented solution in GT as compared to coding it in another environment. 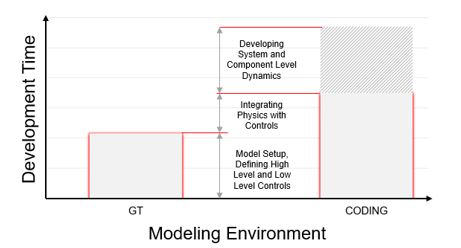 This work describes a detailed and efficient computational methodology, using a Dynamic Programming algorithm, designed to study and optimize fuel economy of vehicles with hybrid-electric powertrains. The methodology is general and applicable to any vehicle/powertrain architecture including conventional and hybrid vehicles. It was shown that optimal fuel consumption can vary visibly when the vehicle is subjected to regulatory vs real-world driving conditions. This further strengthens the importance of real-world driving.

One of the novel features of this work, which cannot be underestimated, is the ability to apply the presented computational methodology and DP algorithm as fast as possible. This is accomplished by parallelizing the DP solution. In this study, a 91.11% reduction in computation time was observed for 1800 seconds of a driving cycle for the simulated vehicle model. This makes the solution more practical not only for use at the design stage, but also for conceptual analysis of different architectures where a large number of simulations may be required.