Greenhouse gases are not only responsible for the melting ice in polar regions on Earth but they are also causes of many incurable diseases. Presently, researchers concentrate on the minimization of greenhouse gases produced from petroleum based bulk-power plants, as well as, demotivate the civilians not to purchase petroleum driven vehicles rather than electric vehicles (EV). The Netherlands is planning on banning all non-electric cars by 2025 [1].

However, to run this EV, there are lots of motors and drivers that have already developed electric vehicles fleets. In general, smart EV takes power from the conventional electric grid in AC mode of power in either mode of transfer, for example, wired power-transfer or wireless power-transfer [2]. Moreover, the reintroduced Volkswagen Golf Electric Vehicle uses highly efficient roof top PV cells to harvest solar energy [3]. The AC is converted into DC power and stored in a highly efficient storage battery. In the case of proper combination of speed and torque, for a particular motor, the battery designs are varied for the purpose of applications of the vehicle.  For example, General Motors uses an induction motor for their GM EVI model car [4]. In this vehicle, the stored DC power is to be converted again into AC having variable frequency for providing adequate and variable torque and speed in motor. 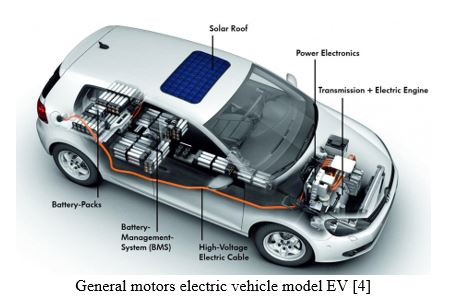 Now, the good quality of motor indicates the smooth and maximum bandwidth of controlling torques and corresponding motor speeds as well as angular wheel speed of EV. Ideally, traction motor gives nearly constant speed under small scale change in torque. Combustion engine based vehicles use multi-gear function in the transmission system to adjust the torque-speed variation of wheels.  According to the principle of induction motor, when the supply voltage increases, the speed of the motor increases while torque decreases. On the other hand, when the current increases to motor, the torque increases while speed decreases and vice versa. In the other case, when the frequency increases, the motor provides low torque [4].

The output torque of the motor can be controlled by adjusting the field excitation. The high energy density is required to achieve the high torque in certain range of speed of the vehicle. In case of Permanent Magnet (PM), the size of PM increases whereas it allows less-control on magnetization [5]. However, induction motor possesses less copper losses in rotor winding and provides higher efficiency than the PM motor. The motor output torque can be adjusted by setting proper field current into the coil oriented induction motor. Another control technique is contactless control which uses two inverters simultaneously where each are half power rated and it can be extended to four times base speed at constant operating power otherwise that would be two times base speed. Therefore, it is clear that the torque of an induction motor can be released by Pulse Width Modulation (PWM) current control technique. Alternatively, excess torque can deteriorate the rotor speed, so it is also concerned to maintain the adequate level of voltage at motor winding.  Hence, synchronous current control regulator can be used to retain the voltage and current.

The Virtual Synchronous Converter (VSCon) includes the mathematical model of a synchronous machine which behaves in the same way of synchronous machines [6]. Mathematically, as a Synchronous Generator (SG) provides a voltage supply and it has control principle consists of voltage and frequency regulation [7]. Since the output of SG depends on the angular speed of the rotor of SG as well as mechanical frequency, similarly, VSCon can control the inverter output voltage as well as current to be connected with vehicle motor by controlling the PWM in inverter. First of all, to accelerate the EV, initial torque is much higher than the torque at nominal speed of the vehicle. The control of acceleration can be selected by pedal in top-down methods producing numerical value to dynamic model of VSCon would produce appropriate frequency in application of variable frequency drive. In case of voltage control, similar methods can be applied where both cases would work on droop mechanism in VSCon. Then, the PWM signal controls the inverters. Finally, proper combination of voltage and current can be achieved in inverter to the motor to be driven in adjustable torque-speed.

There are many rotating control mechanisms that have been developed to control the torque and speed to the electric vehicle, however, it permits small range of torque-speed of regulation. In this method, static control of voltage as well as current and frequency can be used to make the bandwidth widen rather than individual control in small bandwidth of torque-speed. This can also allow droop mechanism to improve the efficiency of torque-speed profile. The main challenge of using this control technique is to determine the system response frequency.