As large airline companies compete to reduce emissions, fuel burn, noise and maintenance costs, NASA expects more of their aircraft systems will shift from using turbofan propulsion, pneumatic bleed power and hydraulic actuation—to using electrical motor propulsion, generator power and electrical actuation. This requires new flight-weight and flight-efficient powertrain components, fault-tolerant power management, and electromagnetic interference mitigation technologies. Moreover, initial studies indicate some combination of ambient and cryogenic thermal management and bus voltages that are high in comparison to the state of practice will be required to achieve a net system benefit. Developing all of these powertrain technologies within a realistic aircraft architectural geometry and under realistic operational conditions requires a unique electric aircraft test bed. This report details the development plan for a unique test bed, with a reconfigurable architecture, that industry and Government can utilize to further mature electric aircraft technologies. This test bed is intended to be complementary to other capabilities within NASA, industry and academia.

Purpose of the Test Bed

NASA’s Electric Aircraft Test bed (NEAT) is being developed to enable end-to-end development and testing of a full-scale electric aircraft powertrain. The primary purpose of the test bed is to enable the high-power ambient and cryogenic flight-weight power system testing that is required for the development of the following components to Technology Readiness Level (TRL) 6:

Electric Aircraft Test Bed Capability in the United States
As aircraft transition to more-electric architectures, they require a broader test bed capability for full technology maturation and validation. Historically, turbofan engines that have been tested in altitude-controlled wind tunnels and engine components, such as compressors and turbines, have been tested with high-power electric-motor-driven rigs. With electric aircraft, the drivetrain power flow is reversed so that the turbines drive the electric generators and the electric motors drive the ducted fans. Hence, further technology development requires a new test bed paradigm that supports the testing of flight-weight, high-power motors and power electronics under flight conditions (Jansen, 2015).

Most recently, NASA began to develop NEAT to enable full-scale single-aisle aircraft, ambient and cryogenic powertrain research and development in an electric aircraft system environment for technology demonstration at TRL 6. It will be used for full-scale ground testing of electric aircraft powertrains prior to integration with full-scale aerodynamic flight testing at the NASA Armstrong Flight Research Center for large aircraft configurations.

NEAT fills the niche of a high-power, large-scale, flight-weight powertrain component and system development test bed. The TRL of the entire electric aircraft system is being steadily advanced in collaboration with each of these facilities beginning with scaled component development and ending with a full-scale single-aisle hybrid gas electric aircraft demonstrator. The Air Force Research Laboratory as well as  airliner and engine developers have significant capabilities as well, and the author expects that broad testing will be required across the nation’s full suite of test beds in order to mature hybrid electric aircraft technologies.

Furthermore, it is important to note that this testbed is the key to understanding how actual individual research hardware components contribute to the net performance benefit of the overall aircraft. For example, a cryogenic motor located next to an ambient inverter could suffer thermal losses not identified from motor testing alone, or a high dV/dt pulse-width-modulation (PWM) switching rate in the inverter could damage a low-impedance motor. These system interactions can only be tested in a NEAT-like environment that offers full-scale powertrain system testing under controlled flight scenarios. 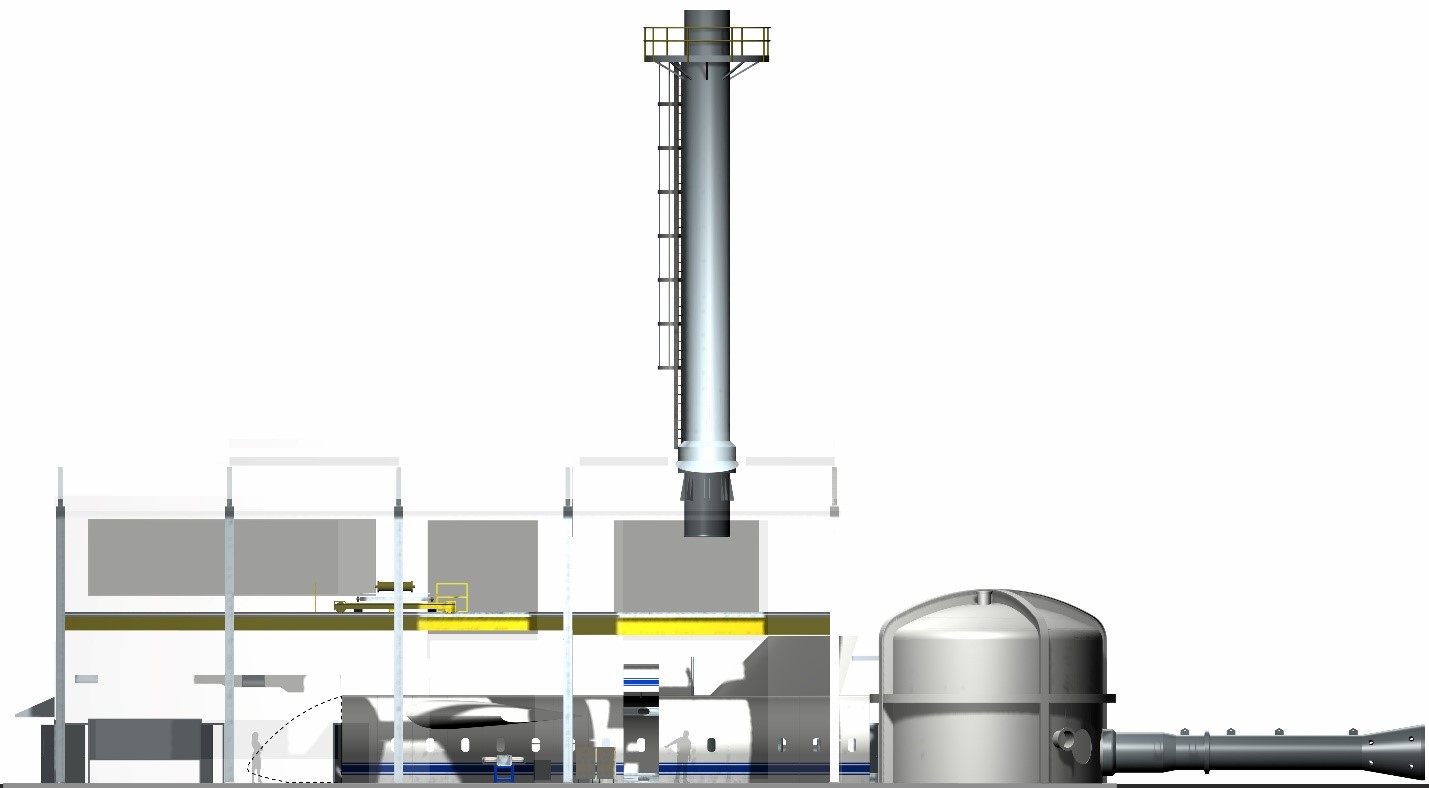 Development Steps for Advancing Powertrain Technology
The scientific goals for developing this test bed may be summarized as finding a way to construct a single-aisle aircraft electric powertrain that provides a significant economic benefit relative to the standard turbofan propulsion systems currently in use.  Initially, the goal is to demonstrate the full complexity of the powertrain system is manageable and safe to use with the best commercially available components. Next, with the performance and control of the powertrain commercial-off-the-shelf (COTS) system demonstrated under simulated flight scenarios, the individual commercial components will be replaced with ambient flight-weight research hardware. Finally, the most advanced cryogenic hardware will be incorporated and tested as it becomes available. This plan of steady scientific progress minimizes development risk and provides the fastest return on investment.

Phased Powertrain Development
We plan to build up the test bed in steps of increasing complexity along three key areas: component count, operating temperature and power level. Initially our component count and power level will be at a minimum and the temperature will be maintained at ambient. The component count will increase as more thrust motor fans or advanced fault control units are added.  As more propulsors are added or enhanced, the overall power level may be increased to 24 MW by utilizing the existing 6-MW substation at NEAT with load regeneration.

A representative outlook of NEAT’s development plan is provided below. It is divided into four phases:

Phase 2: Ambient Research Hardware Testing (FY18 to FY19)
As new higher performing research hardware is developed under NRA, Small Business Innovation Research (SBIR), and in-house efforts such as the megawatt-class motor/generator and rectifier/inverter, the new technologies will be inserted into the existing test bed. They will be operated at standard temperature and pressure but will provide the high efficiency and less total mass that is required for improved electric aircraft propulsion systems. 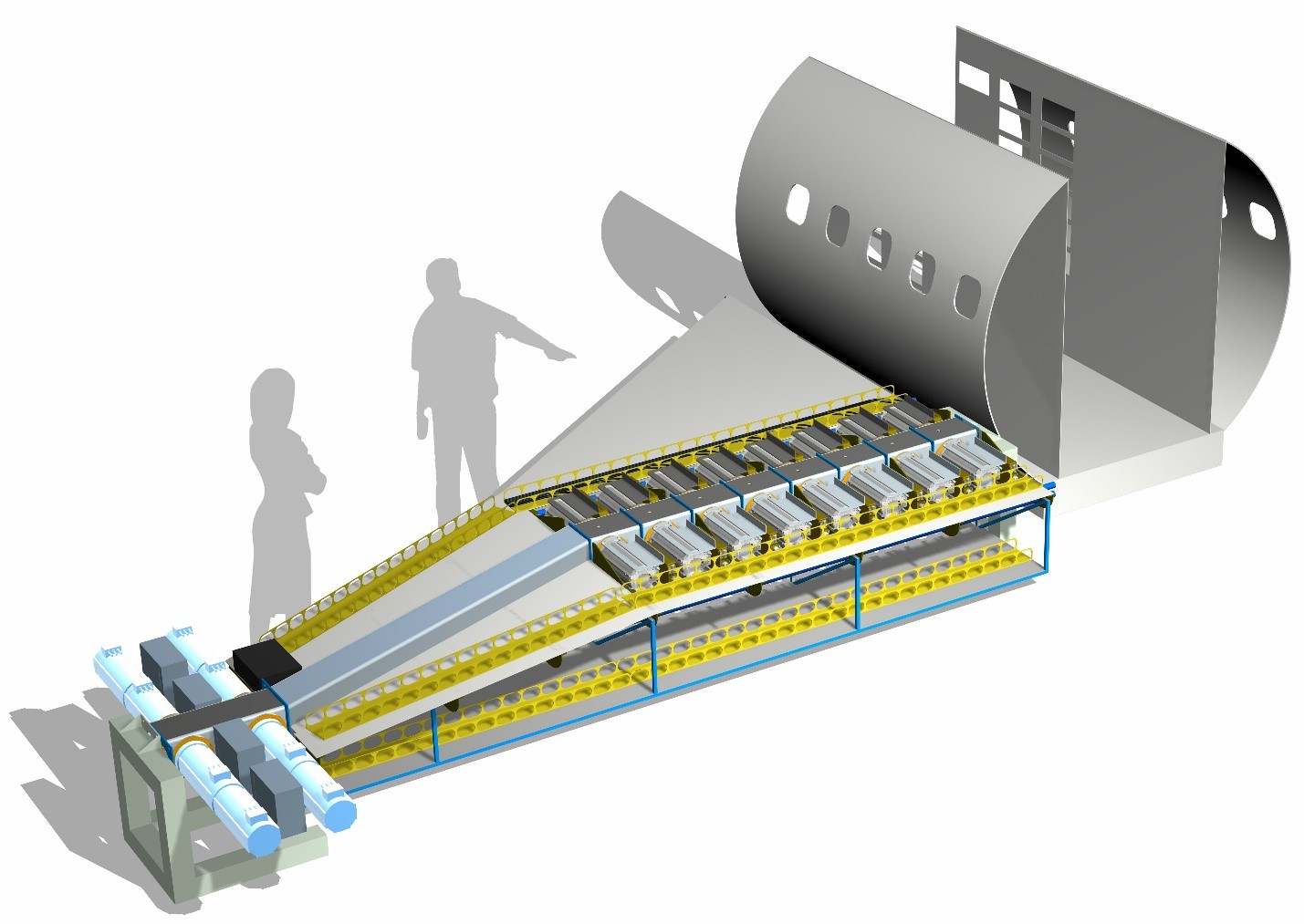 Finally, the complete powertrain package will include a system-level thermal management development capable of providing cryogenic temperatures to some or all of the components.

Future Growth
In all phases of testing, thermal management will be important to keep the equipment from over-heating, and in the case of cryogenic components, to keep the subcomponents operating in their super-conducting range, which will vary between 20 and 65 K depending on which superconducting materials are employed. NEAT can support a future thermal management effort that includes cryogenic fuels and/or cryocoolers. In addition, NEAT has room for expansion with low-cost econfigurations into larger aircraft with higher power systems as the project matures. For example, a full-sized single-aisle aircraft will require about 20 MW for electric propulsion. In addition, opportunities for cost and schedule synergy may exist with cross-center, industry and academia, such as:

Conclusions
The NASA Electric Aircraft Test bed is a key enabler of flight-weight powertrain development. Its high power, remote location, large footprint, conditioned atmosphere, cryogenic infrastructure and extensibility make it a unique test bed for full-scale aircraft powertrain development. Not only does it address and fill a role not currently available with existing test facilities, but when used in conjunction with other Government, industrial and academic facilities, it provides an important next step in the path toward the electrification of future single-aisle aircraft

He graduated in 1990 from Hiram College majoring in physics, computer science, and mathematics. He later completed his Doctorate at Case Western Reserve University. His special fields of interest include thermal energy conversion, machines, and power electronics for aircraft and planetary exploration.

Over his 27 year tenure at NASA he has published in the fields of high performance computing, aero-acoustics, hybrid electric propulsion, and space/terrestrial power systems. He has three issued and licensed patents and four patent applications. He was also recently featured in Wired.Com magazine, Wall Street Journal, Aviation Week, and the BBC Radio 4 Today Program for the development of a unique Venus test chamber, Glenn’s Extreme Environment Rig (GEER), NASA Electric Aircraft Testbed, and for a Stirling power system concept capable of surviving on the Venus surface for over a year. He was also admitted to the Graduate Faculty at Cleveland State University, has served on Glenn’s Faculty Fellowship Committee, and is currently representing Glenn as the Hybrid Electric Technical Area Team lead for the Propulsion and Power Systems Alliance.