Over the past 12 months, Australian politicians have been endorsing plans for one of the largest coal mines in the world [1], while the Great Barrier Reef is being damaged by recurrent bleaching events due to global warming [2].  In contrast to this disturbing mix of climate change denial and evidence on Australia’s east coast, an all-electric ferry has been sparkling like an Argyle diamond on Australia’s west coast.  The 11-passenger, all-electric ferry, “Ellie J” (Figure 1) has been operating for over 12 months on the Swan River in Perth, Western Australia. 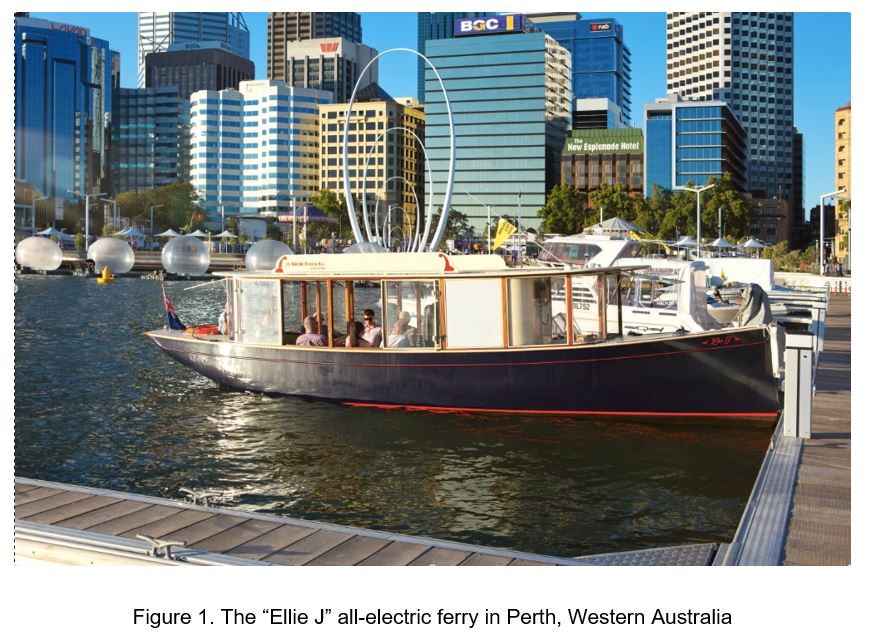 The “Ellie J” operates from mains electrical energy stored in 21 kWh of Lithium-ion batteries.  The vessel also has 1.6 kW of solar panels on its roof that provide up to 35% of its energy requirements [3].  The vessel is propelled by two 4 kW electric outboard motors.

During sea trials of the vessel (Figure 2), it achieved 7.3 knots at full power.   Most impressively, it can cruise at up to 4 knots on solar power alone. 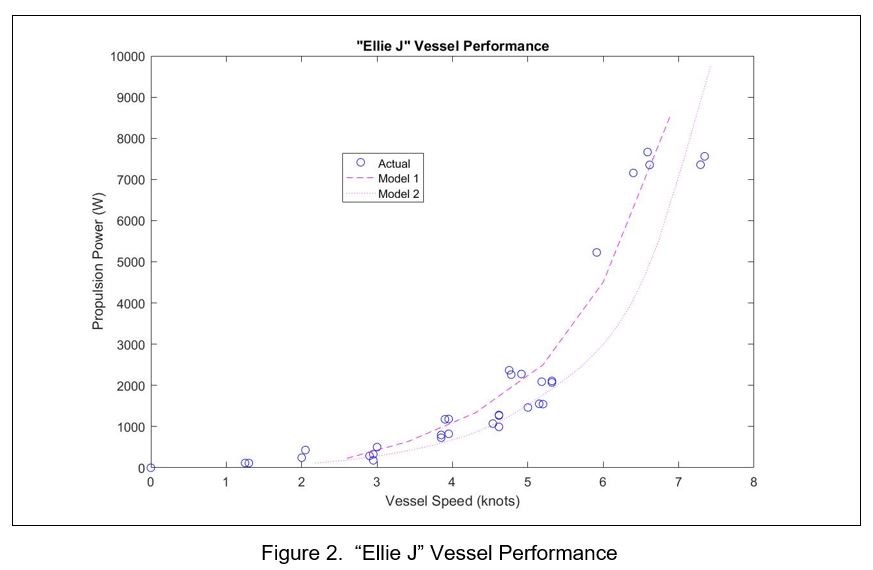 A top speed of 7.3 knots may not impress boat racing enthusiasts, but it is ample for ferry routes on the Swan River near Perth’s CBD, where the speed limit is 8 knots in most areas and drops to 5 knots near bridges and quays.  A feature of this ferry that sailing enthusiasts would appreciate, is its lack of engine noise.  Passengers can converse at normal levels, needing only to compete with the sound of water lapping against the hull.  Unlike diesel ferries that envelop passengers and bystanders in clouds of diesel exhaust as they accelerate from jetties, the “Ellie J” slips quietly away with no emissions at all.

Perth’s Little Ferry Company [4] has demonstrated that electric propulsion is viable for short-run ferry routes and the company has recently launched an identical sister ferry, the “Jessica Leigh”.  Importantly, these ferries are showing that the public is keen to support quiet, low-emissions transportation.  For example, Little Ferry Company’s ferries were rated by TripAdvisor in April 2017 as #3 out of 178 things to do in Perth and in May 2017 as #1 out of 25 Boat Tours & Water Sports in Perth [5].

The International Maritime Organisation (IMO) MARPOL Annex VI Regulations, the Paris Agreement (COP21) in 2015 and the pending Norwegian ban on internal combustion engines [6] clearly indicate that vessel operators need to be considering fuel efficiency and SOx, NOx, CO2 and particulates emissions.  Electric propulsion has been used since the early 20th century in niche applications such as submarines, cruise ships and ice-breakers.    Electric propulsion with battery storage is an important enabler for improved fuel efficiency and reduced emissions, by facilitating increased use of shore electrical power and solar PV.  Early problems with Lithium-ion battery technologies are being overcome and their use is increasing for energy storage due to superior energy density compared to older battery technologies [7].  In the past decade the combination of electric propulsion and energy storage has been used to provide fuel savings and emissions reduction in new electric ferries.

European ferry operators were first to demonstrate the operational savings of marine electric propulsion, by completely replacing diesel fuel with mains electricity and solar energy.  The “Ar Vag Tredan” ferry in France was the first in the world to use shore electrical power stored in super-capacitors [8].  The all-electric car ferry “Ampere” uses shore electrical power and Lithium-ion batteries and commenced operation in Norway in May 2015.  With the change from diesel propulsion to battery, ship operator Norled has reduced their cost of fuel by 60 percent [9].

Importantly, the “Ar Vag Tredan” and the “Ampere” are made of aluminium.  The “Ampere” is only half the mass of a similar sized steel ferry and has double the expected hull lifetime [9].  This has important implications for Australia, because the country is the world leader in aluminium shipbuilding.  Australian aluminium shipbuilders built more than 70% of the world’s contracted high-speed aluminium vessels in 2008 and one of those shipbuilders, Austal, is contracted to manufacture 15% of the US Navy’s fleet [10].  Endorsement of high-efficiency vessel exports could be a more useful endeavour for Australian politicians than thermal coal exports.

Short-run passenger ferry routes in metropolitan areas is an ideal application for electric propulsion with battery storage, due to the close proximity of mains electricity and the need to reduce SOx, NOx and particulates emissions.  The “Ellie J” has demonstrated the market for these vessels in Perth and indeed in all cities with navigable rivers.  The path is clear for operators to apply electric propulsion for improving metropolitan air quality while impressing customers and achieving significant operational savings.