For some countries, Rickshaws are intrinsic elements of a national transportation system.  As much as one enjoys a rickshaw ride, however, there is no overlooking the significant amount of labor and effort exerted by the rickshaw puller.  Battery-powered, ‘electric’ rickshaws pioneered by companies like Beevatech Ltd seemed to be a very popular solution when they were first introduced.  However, there were a number of drawbacks [1,2] and in some cities they were banned from commercial operation when energy consumption overloaded national grids [3].

To mitigate the impact to the grid and re-introduce a better solution, the Control & Applications Research Centre (CARC) of BRAC University conducted research to make electric rickshaws independent of the grid through the use of offline renewable solar energy resources and newly developed technologies [1,2].

Traditional tri-wheel electric rickshaws have wheels driven by a motor and set of batteries only.  A new method aims to introduce a ‘hybrid’ driving system powered by human and solar power in tandem.  The power supply to the electric-assist motors are controlled by a throttled system, as with motorcycle acceleration.  The old electric-power method completely eliminated any human effort running the rickshaw as opposed to the original target of merely reducing the human effort.  This led to a higher energy consumption from the battery bank and consequently from the local grid which was overloaded.  In the new design, the rickshaw puller will receive assistance from the motor equipped with battery backup to ease up his paddling efforts when he requests assistance.  This is achieved by introducing a torque sensor paddle.

Concept for the PV- and torque sensor-assisted rickshaw van

For the second aspect of this endeavor, the power required to drive the rickshaw during the daytime as well as charging the battery when the rickshaw is idle, comes entirely from the sun.  A photovoltaic (PV) array is installed as the roof of the new rickshaw to replenish the energy used on the journey.  This provides a portion of the required electrical load integrated with the battery bank; thus, increasing battery operating time.

The last layer of the development includes installation of a battery charging station that is completely fueled by a solar canopy.  This step is taken to ensure complete independence of these electrically assisted rickshaws from the national grid [2]. 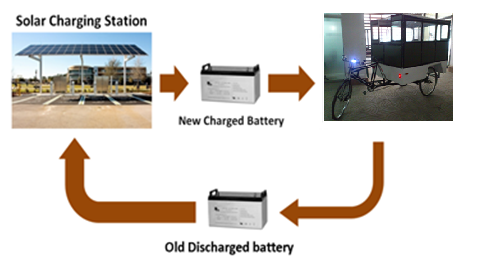 This threefold solution has already been field-tested individually and analysis’ presented [1,2,4]. The study reveals that the individual implementation of the torque sensor paddle and the PV array support saves over 50% of energy consumption (from an off-vehicle source).  They also experienced increased battery life-per charge due to less discharge each day and also resulted in longer distance coverage.  The solar battery charging station could then be used to fully-charge the batteries.  Therefore, it was proved feasible that an electrically-assisted rickshaw could be completely independent of the national grid [2].

Enabled with these results, the CARC is now scheming battery-operated rickshaw vans in various forms to serve different purposes; as human hauler, cargo hauler, and ambulances.  The design of the ambulance has been considered specific to carry basic medical equipment, such as oxygen supply, patient bed, first aid boxes, etc.  This vehicle is being developed for use primarily in the rural areas, where use of such motorized vehicles can bring about some economic and social growth while lack of electricity or fuel discourages the practice. Addressing the safety issues, the vans are equipped with rear wheel braking system. In addition, the rear wheel’s base width is widened for better stability during turning.

The PV array enables the rickshaw van to cover a longer distance while using a lower amount of stored battery capacity.  On paper, a PV panel is guaranteed to last at least for twenty years. And if this proves to be the case in practice, the vehicles can enjoy a far lower total cost of ownership compared to what they have now.

With electrical support added to the vans, it will be possible to deliver goods to customers sooner. It will also make possible transporting students between their home and schools in a safer and quicker manner, and hauling a large number of people from one place to another in an energy efficient and easy manner [1,4,5].  As the cost of the rickshaw van with the PV array support is lesser than that with increased battery bank support, the rickshaw van is deemed to be affordable. However, the critical criteria that still odds out is that no matter how low the researches could bring down the prices to, it will require some amount of monetary toll to construct such a rickshaw van. Thus, subsidies from organization, for example, Infrastructure Development Company Limited (IDCOL) can help bring the price of these vehicles within a better reach of the people.

The concept of being ‘green’ can also be sponsored in emerging economies with these rickshaw vans, because such vehicles emit no pollutants in the environment [3,5].  World leaders are working together today to improve the environment. With that being said, the demand for vehicles that are not contaminating the environment is climbing.

Whenever the notion of reinventing or developing a new technology emerges, the first thing that comes to mind is contributing something that is useful to the community. The electrically assisted rickshaw not only helps the people to earn more due to the lesser travelling time and thus more frequent trips, but also improves their health conditions due to reduced physical stress [6,7].  The expected outcomes that have been discussed only support the long term sustainability.  Market expansion is expected to come, but for that to happen, we need support assistance to bring this into the mainstream. Through the implementation of these technologies, lifestyles of millions of people are directly or indirectly impacted by electrically assisted rickshaws. There is indeed a dire need of an alternate automobile that can help mitigate the current crisis of electric power of some nations, along with fulfilling the vital necessity of a transport that it is both economically and environmentally friendly.

Dr. AKM Abdul Malek Azcad is currently a Professor in the Department of Electrical and Electronic Engineering (EEE), BRAC University. From 1992-2006, he worked as an academia (undertaking casual teaching) for Macquarie University, The University of New South Wales, University of Western Sydney and Institute Technology Pekerja. He is a consultant (Engineering) for the World Bank Project "Productivity and Efficiency of Solar House Panels in Bangladesh: Economic, Social and Food Security Implications" associated with BIDS (Bangladesh Institute of Development Studies). He is the founder and Director of the Control & Applications Research Centre (CARC) under the Department of EEE, BRACU where he has also been the initiator of the synergy program between BRAC and BRACU undertaking numerous research projects, such as solar home system components testing for Infrastructure Development Company Limited (IDCOL), Performance analysis of BRAC Solar PV modules, etc. He is also the founder and counselor for the IEEE Student Branch at BRACU. He has worked as a Development Engineer for a biomedical engineering project (Direct Cardiac Compression device) with HEART ASSIST TECHNOLOGY Pty LTD (Australia) in collaboration with Cardiac Technology Centre (CTC), Royal North Shore Hospital, North Sydney, Australia.