Electric drive vehicles have the advantage of a much wider variety of locations that can provide refueling.  Home, work and public locations provide a far greater number of potential fueling (recharging) points than the 180,000 gas stations in the U.S.  While the vast majority of charging is performed at home overnight with low or modest rate AC charging, much higher charge rate DC-fast charging (DCFC) enables a direct connection to the DC leads to the vehicle battery for the very fastest rate charging.

DCFC is typically thought most useful for battery electric vehicles (BEVs) that have no gasoline engine backup for intercity travel, BEVs that drive an unusually large number of around-town miles every day, or to support any kind of electric vehicle driver who does not have the ability to charge at home (e.g. multifamily housing residents or those who park on the street).  DCFC is most often associated with the fastest charging rates possible in an attempt to approach the rapid energy transfer rate of gasoline refueling.  DCFC charge rates of 100kW+ require grid connections that are only typically available in commercial or industrial sites (and not homes).  Homes could deploy DCFC but only if limited to much lower charge rates when used for Vehicle to Home (V2H) or Vehicle to Grid (V2G) applications.  Some competitive technologies to DCFC are such concepts as plug in hybrid electric vehicle (PHEV) powertrain architectures that have gasoline/Diesel range extenders, dynamic wireless charging, or battery swapping.

While DCFC still delivers slower than the energy transfer at the gas pump, DCFC can get the electric vehicle driver back on the road conveniently with a battery replenished to provide a substantial amount of range.  For an intercity trip, a rough estimate is that a large battery BEV (such as an 85kWh Tesla Model S) can acquire enough charge for about 2.5 hours of highway driving in 30 minutes at the fastest Tesla Supercharger DCFC station.  This net refueling time is only modestly longer than a conventional vehicle on a long highway trip when considering a realistic long trip gas station stop is likely to include stretching one’s legs, a bathroom break, or perhaps grabbing a bite to eat or a snack (and not just the 5 minutes for the actual fuel pumping)

While the common SAE J1772 AC Level-1 and Level-2 charging standard (Figure 1) capable of a maximum charge rate of 19.2kW appears to be a settled matter in the U.S. for low and modest rate charging, there are several unique Fast-Charge implementations or standards in the U.S. for the fastest charging: CHAdeMO, the SAE J1772 Combined Coupler Standard (called CCS or “Combo”) and Tesla.  All are capable technologies with each having some advantages [1]. 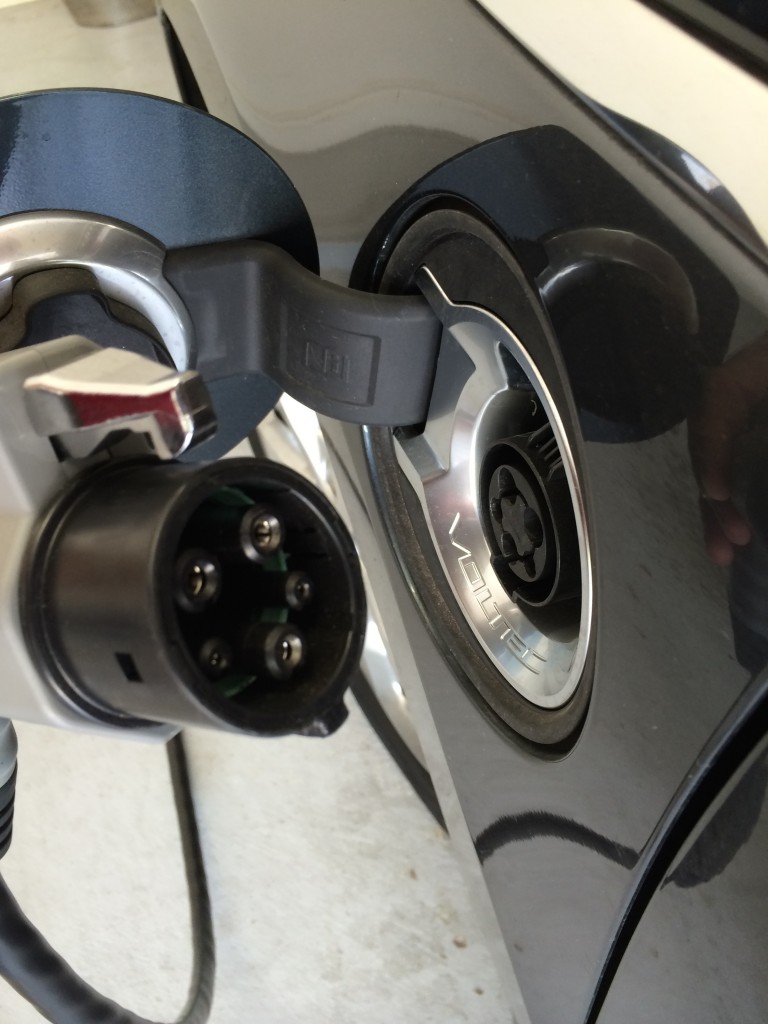 CHAdeMO is the most established DCFC interface at this time with over 3500 stations worldwide (over 550 in the U.S.) and CHAdeMO DCFC ports available on the Nissan LEAF and Mitsubishi iMIEV (Figure 2).  The interface was developed by Nissan, Tokyo Electric Power Company (TEPCO), Mitsubishi, Subaru, and Toyota and first deployed in Japan [2]. The CHAdeMO DCFC coupler is not physically compatible with the standard SAE J1772 AC connector. Thus, a Nissan Leaf with a CHAdeMO DCFC port also has a SAE J1772 AC port (Figure 3). While the standard specifies a maximum 100kW charge rate, implementations today appear to have a maximum charge rate of 40kW to 65kW (sometimes limited by the EVSE or grid connection and not by the vehicle). Nissan has been pioneering the proliferation of affordable moderate range BEVs with the LEAF and aiding firms such as eVgo in seeding CHAdeMO DCFC infrastructure within cities. Driving a LEAF with an 84 mile EPA range intercity would likely to be a logistical challenge for the typical driver since it would require a 20-30 minute CHAdeMO DCFC for every 72 minutes of highway driving (84miles/70mph).  Given the install base of CHAdeMO chargers and LEAFs. Many LEAF owners voice their frustration that “ There already is a DCFC standard, CHAdeMO, why can’t other manufacturers simply adopt it? ” 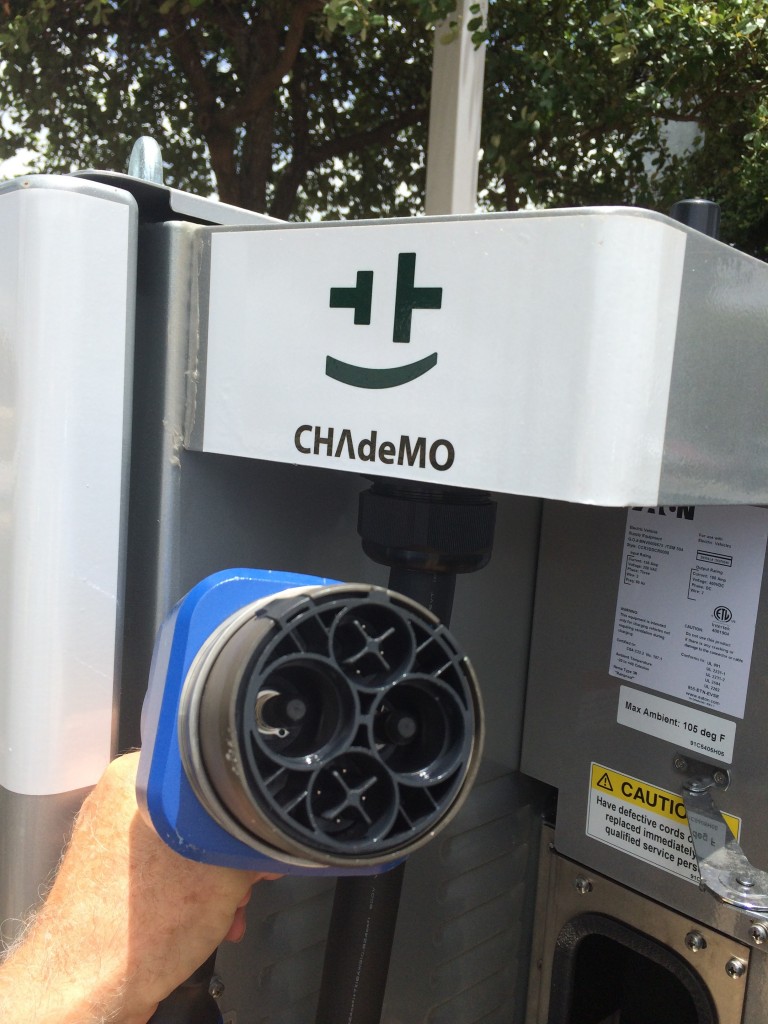 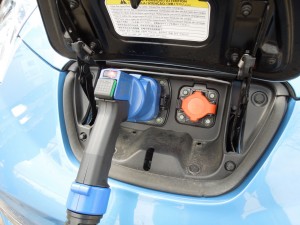 The SAE CCS (Combined Charging Standard) or “Combo” standard was developed in a SAE committee process that was open to all automakers to participate [3]. For a variety of reasons (including the belief that the SAE J1772 coupler was generally considered to be the accepted AC Level-1 and Level-2 charging standard in the U.S.), the members of the SAE committee wanted to create an upward compatible coupler for DCFC.  Some of the advantages to this approach are the reduction of cost and complexity of two separate interfaces (J1772 using the Control Pilot, CHAdeMO using a CAN bus) and the avoidance of the need for a large door for two separate connectors. An upward compatible interface was created by adding higher capacity DC+ and DC- pins and updating the spec to incorporate power line carrier (PLC) communications modulated on the Control Pilot signal to support DCFC (Figure 4).  This upward compatible DCFC standard was eventually adopted by Audi, BMW, Daimler, Ford, General Motors, Porsche, and Volkswagen.  The CCS standard allows for a single gas-filler sized fender opening, a lower cost, and an upward compatible coupler to the existing J1772 AC coupler that is pervasively deployed.  CCS advocates’ position seems to be that one charging interface standard is better than two for reducing costs to help make PEVs cost competitive, that there are an infinitesimally small numbers of electric vehicles on the road today as a nascent technology so the industry should not be bound to a less optimal older standard, and that there are methods to accommodate the transition to CCS. 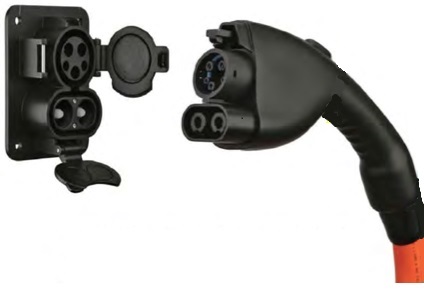 Since 2012, Tesla has employed a single receptacle on their Model S for both low and modest rate AC level1/2 charging and the fastest rate DC fast charging [4].  It is the smallest of the DCFC connectors and has a maximum charge rate of 90kW today, with a stated objective of 120kW to 135kW in the future (Figure 5).  The Tesla coupler and interface architecture are designed such that a Model S driver can charge using a Tesla EVSE (either AC or Supercharger DCFC), an SAE J1772 EVSE (using an inexpensive J1772-Tesla adapter), or a CHAdeMO EVSE (using a CHAdeMO-Tesla adapter).  Tesla apparently participated in the SAE committee process and made the decision that they would use the same control-signaling scheme as the SAE J1772, but that it would be more beneficial to create a new single/smaller coupler that could accommodate both AC & DC fast charging through the use of a different physical connector that the J1772 and by enabling CHAdeMO or SAE J1772 CCS physical compatibility using adapters.  With this fastest 135kW DC fast charge rate, Tesla attempts to make a reality of their vision of a large battery/long range BEVs with intercity travel capability as a full functional replacement of a conventional gasoline/Diesel vehicle. 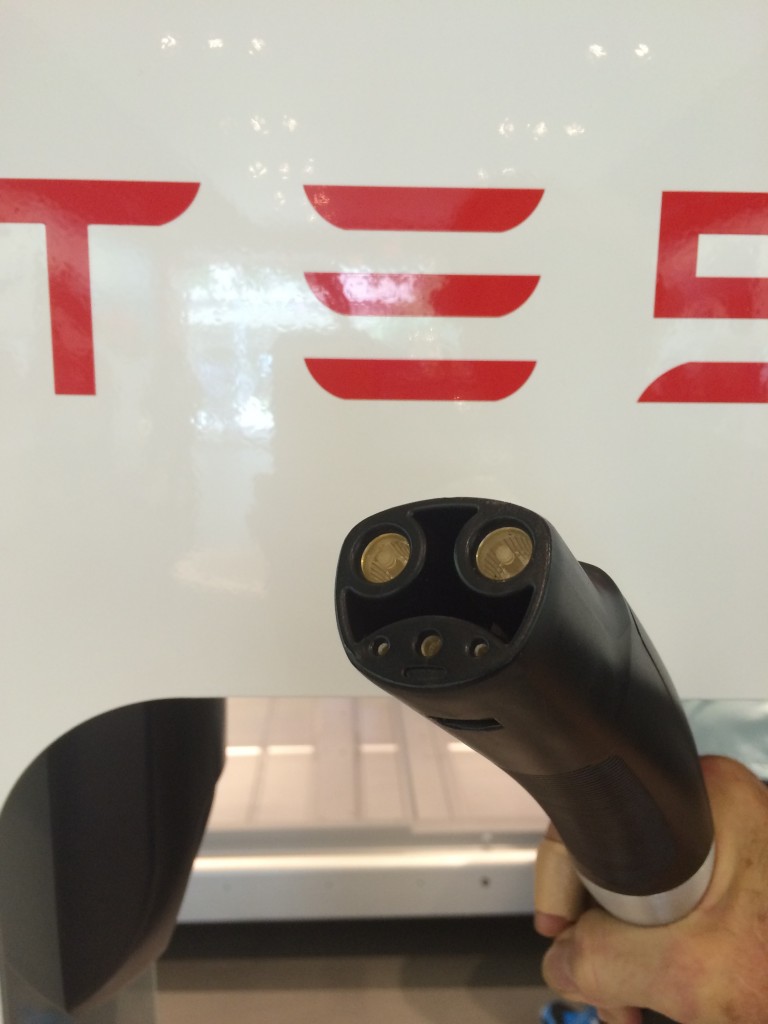 To summarize, the situation appears to be that the electric vehicle community in the U.S. has CHAdeMO with an early lead from infrastructure already implemented in Japan years ago (and now also in the US) and two pioneering electric vehicle manufacturers trying to make affordable mass-market modest-range BEVs that can truly meet the needs of drivers for around town commuting.  These manufacturers wanted to enable DCFC in their BEVs and the CHAdeMO technology was already readily available.  It was rational and noble to chose to CHAdeMO and simply deploy it.

The SAE CCS standard has more vehicle manufactures’ support, upward compatibility and a single plug/connector, a traditional gas-filler sized recharging door allowing greater design flexibility, and communications protocol commonality with the pervasive J1772 AC interface.  At this time there are two vehicles with a CCS port available:  The Chevrolet Spark EV (available only in California and Oregon), and the newly introduced BMW i3.  A far lesser number of CCS EVSEs are installed than CHAdeMO DC fast chargers at this time.

Tesla has to date installed about 100 of their Supercharging stations across the U.S.  As part of their strategy to demonstrate the ability for a pure electric BEV to fully replace a conventional vehicle (or a PHEV), they have aggressively implemented their free Supercharger DCFC network around the US (and in other parts of the world) to enable intercity travel with their Model S and future models.  Most wish there was a single DCFC standard (as there is for J1772 AC Level-1 and Level-2 charging). It is rational to believe a single common DCFC standard might further reduce some costs, increase common vehicle components, and eventually enable more DCFC installations available.  Now that the basic DCFC landscape has been described, in Part 2, we’ll explore what the future may hold.

His current research interests are PEVs, Smart grid, PEV interactions and synergies with the electric grid, and renewable energy.

Throughout his career he has been involved with leading edge technology development in computing while also being keenly interested in automotive technologies.  His expertise in these distinct areas has become more synergistic as vehicles have deployed progressively increasing amounts of computing and electric drive technologies to improve fuel economy, emissions, safety, and performance.

Dave was one of the original designers and technical team leaders of the POWER1 microprocessor that launched IBM's UNIX/RISC systems.  He then led the joint Apple/IBM/Motorola team that designed the first PowerPC microprocessor that launched the Apple PowerMac and IBM PowerPC based systems.  He went on to lead multiple R&D teams responsible for high-speed fiber optic based adapters & switches, the POWER2-SC microprocessor (used in the 1997 IBM Deep Blue chess playing Supercomputer which beat World Chess Champion Garry Kasparov), and other advanced processors and systems.  He later formed a design team for Sun Microsystems focused on power efficient multi-core/multi-thread microprocessor development.  From 2006 to 2007 he was the team manager of the University of Texas DARPA Urban Challenge autonomous vehicle team and an adviser to the UT-Austin Mechanical Engineering Department of Energy/Challenge X hybrid vehicle development team.  Today, he is one of the researchers in Austin’s Pecan Street Consortium/University of Texas Plug-In Vehicle and Smart grid research project.