By Mahesh Krishnamurthy and Jose Garcia

Traditional electric hybrid vehicles combine internal combustion engine power plants with electric motors/generators to propel the vehicle or capture its braking energy.  In the same way, hydraulic hybrid vehicles couple hydrostatic transmissions and hydraulic accumulators to an internal combustion engine to achieve the same tasks of their electric counterparts.  The advantage of using any of the two hybrid systems is that it allows the user to store kinetic energy and reuse it without additional fuel consumption.  Additionally, hybrid systems in vehicles save energy because they are fitted with Electronic Controller Units (ECU) that manage the engine performance to for optimal operation so that less fuel is consumed without sacrificing power requirements.

Current electric or electric hybrid vehicles use regenerative braking technology.  In almost all of these vehicles, the energy required to stop the vehicle is partially absorbed by a battery pack. However, most of the braking effort is still performed by a frictional method that converts kinetic energy (vehicle in motion) to heat energy (brake discs or drums get hot).  The major disadvantage of this method is that only a portion of the available kinetic energy can be effectively converted into electric power.  This is mainly because the required time to charge a battery pack is significantly longer than the time it takes to stop a vehicle.

Given that only a 1-2% of the total energy capacity of the battery pack in an electric or electric hybrid is recovered per braking event, it can be said that electrical energy recovery is mostly feasible for vehicles that perform repeated breaking operations like those seen in city driving. Figure 1 shows a plot of the city drive cycle as established by the EPA for electric and plug-in hybrid vehicles [1]. 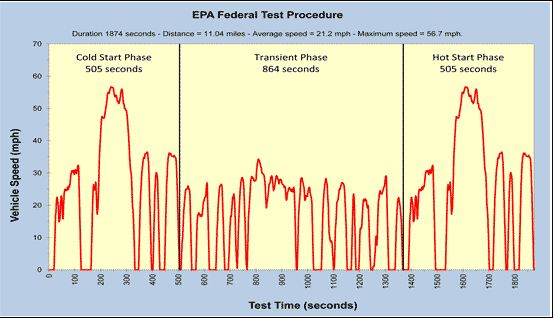 Other alternatives for energy storage in ground transportation vehicles include hydraulic hybrids [2] and mechanical flywheel energy recovery systems [3]. The Hydraulic Launch Assist (HLA) drive-train system developed by Eaton Corporation [4] is a combination of an internal combustion engine (ICE) configured in parallel with a hydraulic transmission.  Other technologies propose a series configuration like the one shown in figure 2.  The advantage of this configuration is that it allows the engine to be decoupled from the drivetrain allowing the Electronic Control Unit (ECU) to run the engine at its most efficient rate.  However, these technologies still depend on the use of a combustion engine with all of its known environmental and oil dependence issues.  Recent testing with the hydraulic hybrid technology is said to improve fuel economy by as much as 60% [2], but has to this date barely penetrated the market, either because of economic uncertainty or lack of  public knowledge. EH2 Energy Storage: A novel concept for extending the range of electric vehicles

The goal of this research project is to design and implement an electric-hydraulic hybrid drivetrain for storing braking energy and for propulsion of EVs, PHEVs and FCVs. In the proposed method, braking energy is stored in a hydraulic accumulator instead of an electric battery, allowing the system to capture larger amounts of power. The hydraulic system consists of a fixed or variable ratio hydrostatic transmission, hydraulic accumulators, electrically actuated hydraulic valves, electric motors, a battery pack and an electronic controller.  It can accept high frequencies of charging and discharging, making it a promising candidate for electric vehicles. Therefore, this technology is highly suitable for passenger cars, sport-racing vehicles, express cars, and trucks in cities.

In this technology, the hydrostatic transmission is used to add additional propulsion power to the vehicle and to absorb the power of the decelerating vehicle.  This system couples the benefits of an electro-mechanical drivetrain with an electro-hydraulic drivetrain for increased energy efficiency, improved performance, and extended driving range.  This proposed idea is fundamentally different from the existing approaches, since it is a hybrid drivetrain and not a hybrid vehicle.  It has one electric motor in parallel to the hydraulic drive, as shown in Figure 3.  This novel method is a radical improvement because it can be very effective in capturing large amounts of kinetic energy from the moving vehicle.  A hydraulic accumulator is coupled to a fixed displacement pump and hydraulic motor to conform a hydrostatic transmission.  This hydrostatic transmission is used to capture the kinetic energy of the vehicle into a pressurized fluid.  The pressurized fluid is stored in the accumulator, which is controlled by an electro-hydraulic control valve.  Additionally, since the hydrostatic transmission is mechanically coupled to the drive train of the vehicle, the available torque to accelerate the vehicle also increases.  This would lead to vehicles that can be designed to use smaller electric motors since the torque requirement could be split between the electric and hydraulic motors. 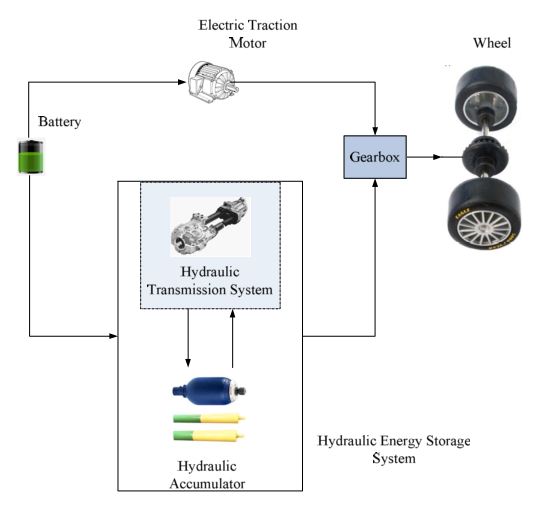 The advantage of this method is that it allows rapid capture of most of the energy in the accumulator to be used later to accelerate the electric vehicle without significant current draw (or no current at all) from the primary source of power, which in this case is the battery pack.  This technology will benefit users of EVs, PHEVs and FCVs because the amount of power drawn from the battery pack or fuel cell will be reduced; hence, extending the range of the vehicle on a single charge, while allowing vehicle manufacturers to design smaller battery packs or fuel cells, and increasing battery life.  This technology will find primary use in vehicles that have drive cycles with frequent stops such us taxis, city buses, garbage trucks, delivery trucks, municipal service vehicles, small all terrain vehicles, four wheelers, motorcycles, and golf carts.  Additional immediate applications include major mass transportation and service vehicles such as city trains, elevators and construction vehicles.  Potential future applications could include wind power turbines, tidal wave harvesters, and agricultural equipment.

Research is currently underway to quantify the amount of power saved by the proposed method in this work.  Preliminary simulated results show that a 200 kg vehicle traveling at approximately 20 mph (~10 m/s) could be completely brought to a stop in 5.5 seconds [5], as shown in figure 4. This study defines six modes of operation, where various power paths and scenarios are described.  According to the simulations 5332 J or 1.5×10-3 kW.hr could be absorbed using the proposed hydraulic regenerative system and then released to launch the vehicle. Given the aforementioned deceleration process to be 5.5 seconds long, it is estimated that approximately 0.27 kW could be saved in each breaking event. In this case, the total amount of energy is limited by the size of the accumulator.  Electric batteries are energy dense but require longer periods to fully charge them.  On the other hand hydraulic accumulators are power dense reducing the charging time and maximizing power recovery. Conclusions
Simulation and preliminary experiment results show that the hydraulic energy storage system can be combined with a battery to develop a hybrid drivetrain for power assistance and energy storage.  Energy stored in the accumulator can reduce the number charging-discharging cycles of the battery.  This can reduce the battery size and extend battery life.  Successful implementation of this concept can lead to a wider acceptance of electric vehicles.

Dr. Mahesh Krishnamurthy joined Illinois Institute of Technology as an Assistant Professor of Electrical Engineering in 2008. He received his MS in Electrical Engineering from the Missouri University of Science and Technology (formerly University of Missouri at Rolla) in 2004 and his PhD in Electrical Engineering from the University of Texas at Arlington in 2008. He serves as the director of the Electric Drives and Energy Conversion Laboratory and the Grainger Power Electronics and Motor Drives lab at the Illinois Institute of Technology. Before joining IIT, he worked as a Design Engineer at EF technologies in Arlington, Texas. His research primarily focuses on design, analysis, and control of power electronics, electric machines, and adjustable speed drives for renewable energy and automotive applications with emphasis on hybrid, plug-on hybrid, and electric vehicles. He has co-authored over 60 scientific articles, book chapters, and technical reports and has one US patent and three pending. He was the Program Co-chair for the 2011 Vehicle Power and Propulsion Conference and is the Technical Program Chair for the 2013 IEEE- Transportation Electrification Conference and Exposition. Dr. Krishnamurthy is also currently serving as the Guest Editor for the Special Section of IEEE Transactions on Vehicular Technology on Sustainable Transportation Systems and as Guest Editor for the Special Issue of IEEE Transactions on Power Electronics on Transportation Electrification and Vehicle Systems.

Dr. Jose Garcia graduated with PhD and MSc. degrees from the Agricultural and Biological Engineering (ABE) department at Purdue University West Lafayette. He worked as a Research Assistant Professor at the Illinois Institute of Technology (IIT) from 2011 to 2012. While at IIT, he started a fluid power laboratory for instructional and research use and was teaching and developing the curriculum for engineering courses in fluid power and data acquisition and instrumentation. Dr. Garcia authored funded proposals for research in fluid power and tribology. At the present his current research in fluid power focuses on electric-hydraulic hybrid vehicles, and the application of hydraulic drive-trains for middle and small sized wind power turbines. He is also working on the development of a new generation of hydraulic components and systems that can operate using environmentally friendlier fluids. Dr. Garcia has plans to actively continue the development of practical teaching tools that bring industry applications to the classroom.