Abstract – In this article, the Land-Based Test Site (LBTS) project performed to verify the safety and performance of the next-generation submarine of the Republic of Korea, Jangbogo-III Batch-I, is introduced. The LBTS for Jangbogo-III Batch-I is mostly composed of the actual equipment to be mounted on the submarine. Through the LBTS project, 146 technical risks were identified and improved in advance, and the effect of the project was estimated to be more than 600 million dollars.

Introduction
Where a state-of-the-art system is developed, it is very important to reduce the risk of the entire project by verifying the performance of the system in a suitable way in advance. Computer simulation, HILS (Hardware-In-the-Loop Simulation), LBTS (Land-Based Test Site) are known as representative methods for verifying the system. Among them, the computer simulation method requires relatively little cost, but it has the disadvantage that the contents that can be verified are significantly limited. On the other hand, the LBTS method has the advantage of being able to thoroughly verify the system in advance but has a disadvantage in that it requires a lot of costs. The HILS method is considered to be a verification method in which the strengths and weaknesses of the computer simulation method and the LBTS method are somewhat compromised.

In the case of naval vessels, the cost of accidents or failures that are not identified in advance is very high, so managing the risk is even more important when developing a state-of-the-art military system. Therefore, in several naval projects, attempts have been made to verify the system performance as much as possible by configuring LBTS [1]-[2]. For example, in the 1990s, the United States Navy constructed NAVSEA LBTS (IPS FSAD) in Philadelphia to apply the Integrated Power System (IPS) to the next-generation surface ships and conducted tests. Also, in 2001, the Royal Navy of the United Kingdom built a LBTS to test the Type 45 destroyer. Subsequently, the U.S. navy conducted projects to determine and verify the propulsion system of the DDG-1000 at the NAVSEA LBTS [3]-[4].

Among naval vessels, submarines are considered to be at greater risk even if the probability of an accident is the same as that of other types of battleships. Therefore, the LBTS project was carried out for the next-generation submarine of the Republic of Korea, the Jangbogo-III Batch-I, from 2013 to 2020 by Korea Electrotechnology Research Institute (KERI). The goals of the LBTS project, which were determined to reduce the costs and manage risk & reliability, were as follows:

This LBTS project was funded by Defense Acquisition Program Administration (DAPA) and Daewoo Shipbuilding & Marine Engineering Co., Ltd. (DSME). Also, to carry out the LBTS project efficiently and to utilize the LBTS facilities effectively, MOU (Memorandum of Understanding) was signed between KERI and R.O.K. Navy Submarine Force Command, R.O.K. Joint Chiefs of Staff, Naval Maintenance Depot, etc. The LBTS project began in the third quarter of 2013, and the construction of LBTS was completed in the first quarter of 2015. The basic operational tests for each piece of equipment were conducted in 2015, and more than 400 tests were performed over a five-year period from 2016 to 2020.

LBTS Configuration
The electric propulsion system of the submarine and the corresponding layout of the LBTS are shown in Fig. 1. As shown in Fig. 1, the LBTS is modeled after the IPS layout of a submarine. The equipment to be mounted on the submarine, such as DC gensets, large-capacity lead-acid batteries, and a battery management system (BMS), fuel cell converters, other various converters, switchboards, Integrated Platform Management System (IPMS), propulsion motor, etc. are installed, and the equipment to emulate the load and environmental conditions, such as a 4QL (4-quadrant load) which emulates propulsion load, converters which emulate hotel load, Test and Signal Emulator (TnSE) which generates and emulates various signals, cooling system, lubrication system, and engine exhaust system are also installed in LBTS. To have the electrical characteristics of LBTS similar to that of the submarine as much as possible, the type, length, and arrangement of power cables are installed similar to those of the submarine. 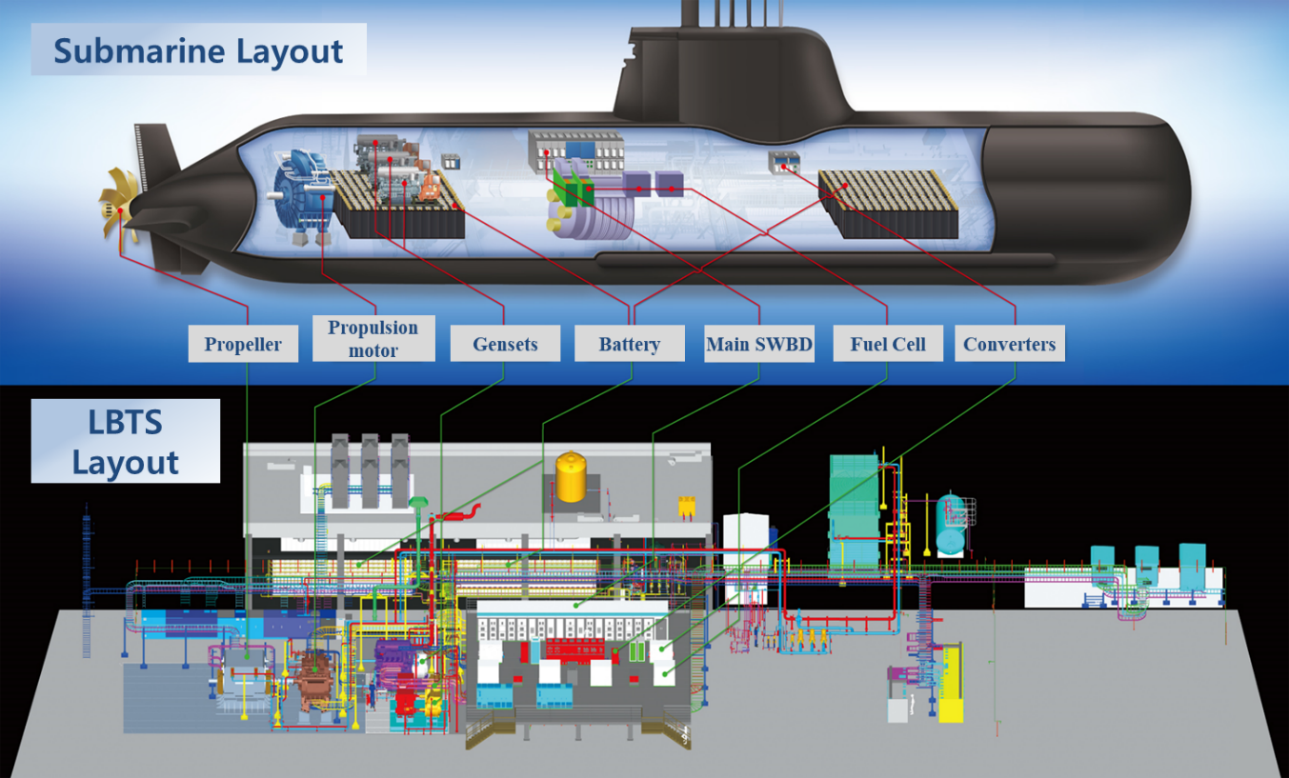 LBTS Test Results
A summary of the LBTS test results are as follows. A total of 401 tests were performed, including operation tests under emergency conditions, and all required performance tests were completed. As a result, 146 technical risks were identified through the tests, and corrective actions were taken accordingly. The technical risks were classified by equipment, cause, and measure. Classified by the equipment, the most improvement was made on the propulsion motor.  Classified by the cause, ‘design error’ accounted for the largest proportion with 80 cases where the causes are classified into ‘design error’, ‘simple design improvement’, ‘installation error’, ‘equipment aging’, ‘ICD (Interface Control Document) error’, ‘etc.’. As the measure, ‘software upgrade’ accounted for the largest number of cases where the measures are classified into ‘software upgrade’, ‘ICD improvement’, ‘drawing improvement’, ‘POS (Purchase Order Specification) improvement’, ‘standard improvement’.

LBTS Effectiveness and Further Utilization
It was evaluated that the delivery schedule of the Jangbogo-III Batch-I, which is developed with a localization rate of 100%, has been advanced by about 360 days thanks to the LBTS project. Even ignoring the economic effect of force integration on time, it was evaluated that a total of about 600 million dollars of economic benefit was brought through the LBTS project. The outcome and future utilization of LBTS can be summarized as follows.

The direct outcome of LBTS is:

The indirect outcome of LBTS is:

Also, the LBTS facility is expected to be utilized continuously for the following purposes:

Conclusion
The LBTS project for the IPS of Jangbogo-III Batch-I, the first fully localized next-generation submarine of the Republic of Korea, was carried out from 2013 to 2020 for risk management and performance verification. The equipment to be mounted on the submarine was installed in the LBTS and more than 400 tests were performed. Through the tests, 146 technical risks were identified and improved in advance. The delivery schedule of the target vessel could be advanced by 360 days thanks to the LBTS project and the total economic benefit of the project was estimated to be over 600 million dollars. Furthermore, the constructed LBTS facilities, with minor modification, are now being used to test the next-generation submarine Jangbogo-III Batch-II, and are expected to be used for many other purposes.