Abstract. This article presents the aeronautical vision for electrical power transportation with a short-term vision. A global analysis of electrical energy onboard will be done during the discussion on problematics introduce by hybridization in the aeronautical domain. A focus dedicated to harnesses will be presented. This will highlight the importance and consideration of harnesses in weight evaluation of the electrical global system to ensure the realization of hybrid or even all-electric aircraft.

In the years to come, for the "hybrid aircraft" ambition, ordering and delivery of power will have assumed great importance in the development of new systems. Indeed, the replacement of pneumatic and hydraulic functions by electrical functions and the increase of electronic systems onboard (wifi, entertainment, computer unit, de-icing, breaking ...) already requires a large production of energy as shown in figure 1. The best design in terms of position, numbers, … of these sources, and consumers on board is essential. The optimization of harnesses will be as important as the optimization of systems put in these extremities. It is an imperative necessity to take into account harnesses not only directly with the weight of them but also for other problematics like, power transmission in terms of power density but also in insulation design, which influences the weight. 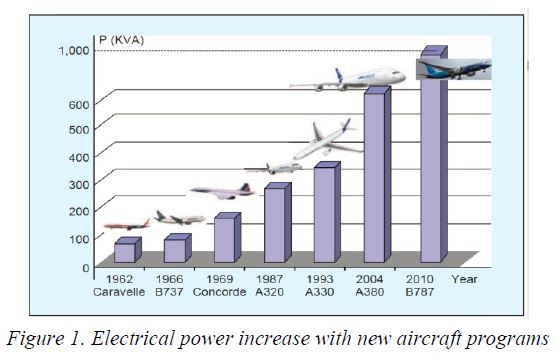 News technologies will have to take into account the increase of AC and DC electrical stress. To our knowledge, no cable or connector supporting these voltage and current levels are currently qualified according to aeronautical requirements, nor weight optimization and installation capability point of view within an aircraft structure. These stresses will occur in different physical phenomena, which needed to consider now. The voltages will increase above kV and then new physical phenomena have to be considered in aeronautical applications. An example of an electrical power chain in the aeronautical domain is divided as follow (see Figure 2):

A LISN could be added and is imposed by the need for standardization of normative tests. 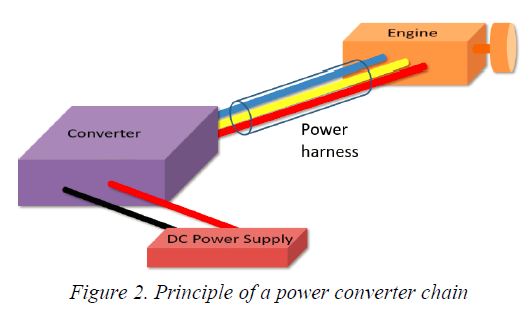 The symmetrical DC power supply and the electronics of redress are connected to the converter by very short cables. The harness power, meanwhile, consists of a shielded three-wire cable, which is of variable length but is predominant in the energy transmission to the engine.

Harnesses carry two types of energy: data and power. The mass distribution presented in Figure 3 shows that the main part of harness weight on aircraft is related to power distribution. Nevertheless, the arrival of electrical controls and the latest generation communication system or computer-assisted system regulations on the latest programs take a more important part in this distribution. Moreover, we note that the more big is the plane, the more the mass of cabling increase, except for the A350, which benefits integrated systems meaning harnesses length reduced due to smaller distance between the equipment of the different systems. 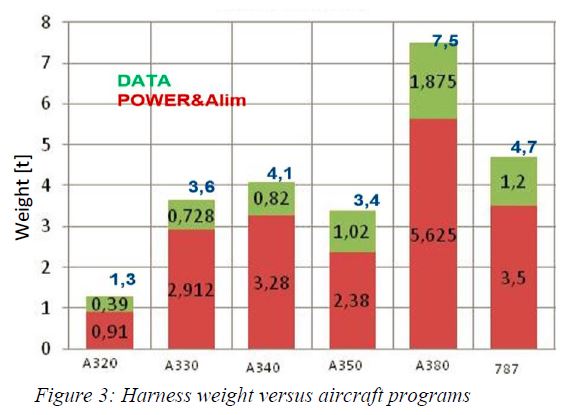 The current powers on board are of the order of several hundred kilowatts. The aircraft generators supply onboard this energy, most of the time by drawing power directly on the engines. The main hybridization system is to replace traditional motors with electric motors powered by a generator associated with batteries. These modifications will increase the embedded power from a few hundred kilowatts to several megawatts to power these particular electric motors. If we consider a middle-range aircraft delivering 2MW with current technologies and considerations, we estimate an additional weight of 2tonnes just for power harnesses on a total of more than one ton for a non-hybrid version.

II.2. Higher voltage will be a solution to support higher frequencies network

One of the solutions to solve the problem of the mass is to increase the frequency of the electricity network currently fixed at 400Hz. The higher the frequency, the smaller the core of a transformer can be at equal power, and the lower the number of turns per volt. The same rule also applies to engines, generators, and more generally all electromagnetic components. Moreover, post-recovery filtering requires much smaller capacitors at a higher frequency. On the other hand, the weight of the harness increases by 67% if we double the frequency as shown in figure 4. 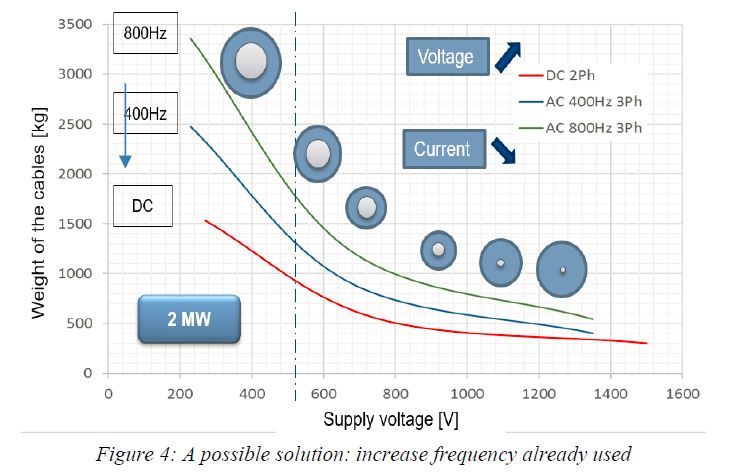 In order to limit the mass increase due to a higher mains frequency, the voltage rise can be considered allowing the current reduction and thus the diameter of the conductors carrying the power can be reduced. Nevertheless, increasing the voltage requires increasing the thickness of the dielectric to limit partial discharges, space charges, and arcing. The partial discharge concerns the insulator of the cables and the connectors. These phenomena appear when some imperfections induced by gas bubbles are present in the material and create electrical discharge in these bubbles caused by high potential difference, which damaged the insulation property. The space charges emerge when a current flows through the cable and generates an electromagnetic field that moves the electrons naturally present in the insulator. This movement of electrons can lead to the creation of a cavity or gas bubble and produce partial discharges. The last physical phenomenon is a consequence of the first two associated with the mechanical effects that there can be friction either between cable or with the structure. This implies a local suppression of the insulator and ionization of the air producing an electric arc between the two potentials. Following this, it is essential to control the components of the cables, including the insulation.

Moreover, this insulator is so important that beyond 1000V, there is almost no difference in mass between the three mains supply frequencies. The solution will be to find the right balance between high voltage and low current in order to limit the mass of the cables or to find new components that will fulfill the energy transport needs in the hybrid airplane while having an acceptable mass and controlled. The solution is similar for AC and DC, it is called HVAC and HVDC.

In conclusion, we presented one of the aspects of electric hybridization of aircraft in the mass increase of power electronics and energy transmission. This mass can be controlled by increasing the frequency of the network but also involves increasing the voltage and decreasing the current to reduce the mass of the harnesses. However, the high voltage is wedged by the presence of a larger dielectric insulator. Future work will focus on materials, cables and connectors that will ensure the transport of several MW. For this, studies of partial discharges, space, arc, EMC and thermal loads will be conducted to validate these components, for both HVDC or HVAC.