Vehicular emissions across the globe are rising rapidly and account for a significant portion of global warming and climate change. Electric vehicles (EVs) provide a cleaner alternative to conventional Internal Combustion Engine (ICE) vehicles even when the electrical grid is predominantly powered by fossil fuels. The move towards clean and renewable energy further strengthens the case for EVs, and the EV revolution is happening faster than previous market predictions. In Dec. 2016, a major EV manufacturer, Nissan, reported that Leaf® owners worldwide achieved the milestone of 3 billion kilometers, saving nearly 500 million kilograms of CO2 emissions [1]. There is an impending reduction in the production of ICE vehicles in the world market owing to adoption of EVs. The shift towards transportation electrification needs to be hassle free for the public such that it is more convincible, affordable, and quick. However, the major hurdles to the broad acceptance of EVs are high battery cost, limited driving range, and need for a faster charge time.

The primary energy source for the EV's drivetrain is the lithium-ion (Li-ion) battery. This is due to their high specific energy (100-265 Wh/kg) and specific power (250-340 W/kg) compared to other battery technologies. Nevertheless, it still adds considerable weight and occupies sizable space in the vehicle. For example, Nissan Leaf’s 24 kWh battery pack weighs around 200 kg and the Tesla Model S 85 kWh battery pack weighs 540 kg. Moreover, the estimated cost of the battery pack is about $200/kWh. Therefore, the price of an EV is centered on the cost of its battery pack. Another issue with EVs is the range anxiety caused due to the limited driving range. For example, gasoline vehicles can go over 500 km before refueling which takes about 2-3 minutes at a filling station located every few kilometers. On the other hand, most EVs in the market can only go about 100-200 km on a single charge, and it takes a long time to recharge the battery. For instance, the Nissan Leaf with a 24 kWh battery takes 4 hours to charge from empty to full with a Level-2 7.7 kW home charger. Also, charging stations are not yet widely available as compared to gas stations in most places.

Wireless charging technology can address the long charge time issues in a better way compared to conventional wired/plug-in charging [2]. Wireless charging enables what is called opportunity charging where the vehicle is charged wirelessly in lesser time than typical but at more frequent intervals during the day, thus extending the EV range [3]. For instance, in addition to residential garages, public, and private parking areas, wireless chargers can be installed at traffic intersections, bus stops, drive-through outlets, and taxi ranks as well. As wireless charging is automatic and does not require human intervention, opportunity charging is a viable option for improving the range and charging opportunities for EVs. Another advantage of wireless charging is the possibility of lowering battery specifications. Opportunity charging allows frequent charging and thus, EVs can travel the same distance with a reduced battery pack size [3], [4]. This will lower the price of EVs and make them more efficient due to less weight from a smaller battery pack. Another option is to keep the same size battery pack and reduce the depth of discharge on the battery, which would increase the battery’s lifespan. The prime importance of wireless EV charging lies in the safety and convenience provided by it [3]-[5]. Wireless charging offers galvanic isolation between source and load and thus avoids the limitations of plug-in charging such as, risk of electrocution due to aging or worn out wires/connections and trip hazards caused by long connecting wires. A wireless charger is also weather proof, as the power transfer takes place due to an electromagnetic or electrostatic link, where the transmitter pad can be embedded underground and does not require a physical connector like the plug-in charging method. This is safe in extreme weather conditions and requires less frequent maintenance or replacement compared to plug-in chargers where the charge point can become frozen on to the vehicle in the harsh winters of regions with colder climate. 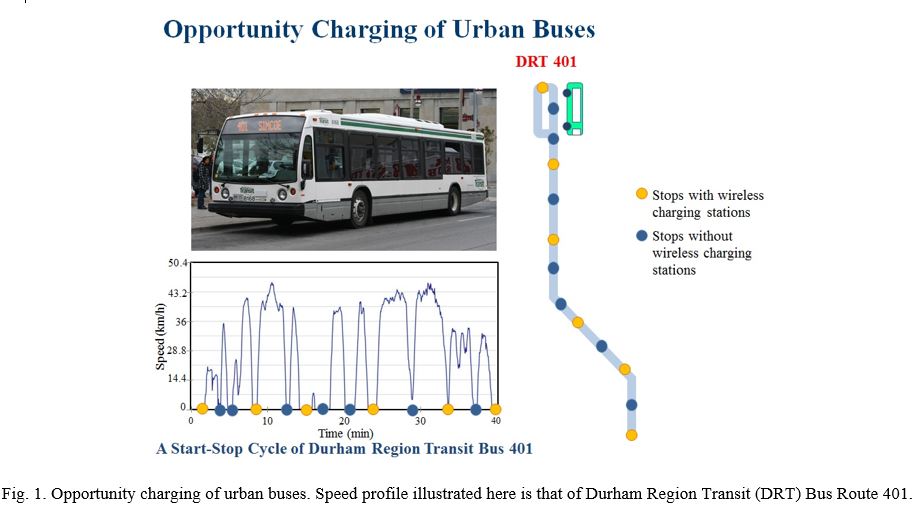 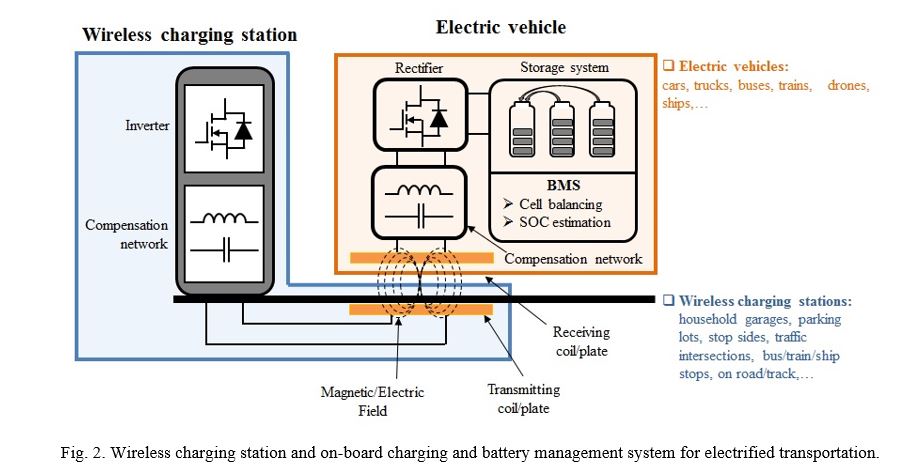 Apart from on-road EVs such as cars, trucks, and motorbikes, other vehicles such as drones, electric ships, electric aircrafts, and mass transit vehicles (buses and trains) can make good use of wireless chargers as well. Wireless charge points can be embedded anywhere you would like a charge point. For buses, this could be at bus stops, depots, repair stations, and also on major traffic intersections where opportunistic charging could be implemented. Another great example is landing pads where a drone or aircraft lands and remains stationary for storage or for loading/unloading. At these points, embedded wireless chargers can be implemented and automatic charging can take place using simple vehicle sensors to detect and communicate with the vehicle. This would reduce charge time as no workers are required to connect and disconnect the charging cables. Wireless chargers can take many forms and can be available at high power ratings with very slim profiles to fit even the shallowest of embedded surfaces with only a few centimeters depth being necessary for the coils or plates. There is a possibility of increasing the energy efficiency of wireless chargers by reducing the number of power conversion stages, especially on the primary side. This can reduce size, weight, and cost of the charging system. Wireless charging can thus provide an automatic, efficient, fast, and reliable alternative to conventional wired charging.

A critical aspect of the charging process is the monitoring, protection, and maintenance of the battery pack, which is accomplished by a Battery Management System (BMS). The BMS monitors cell voltages, currents, and temperatures, and makes sure that nothing is out of bounds which can damage the battery thus reducing its lifespan. The BMS also performs two other critical tasks – to balance all the cells within the battery pack, and to calculate the State of Charge (SOC) of the battery.

Within a battery pack, there is a configuration of series and parallel cells to get the capacity and system voltage required from the battery pack. All the parallel cells are balanced by default because the positive and negative terminals are all connected and they share a common voltage. However, this is not the case with series cells which could charge or discharge to slightly different voltages. Battery cells are not all exactly the same and can have slight differences in internal resistance and actual capacity. Therefore, as you charge or discharge your battery pack, there are differences in the cell voltages and capacities with these series cells. These must be balanced and this is the task of the BMS. There are many ways of balancing the series cells. The most common method is through simple resistors which dissipate energy from the weakest cells which during charging reach maximum voltage the fastest. This allows the other cells to continue charging without the weak cell going into overcharge thereby damaging it. Another method for balancing which has the capability to also balance the cells while discharging, is active balancing. In active balancing, the energy from the weakest cell which has reached full charge is taken and moved to the stronger cells which are not fully charged. This yields a more efficient system overall because the excess energy from the weak cell is not simply dissipated as heat. Active balancing provides two other advantages over resistive balancing – faster balancing time and discharge balancing capability. The faster balancing time enables a much faster charge time because cell balancing occurs in the part of the charge process above 80% SOC where charging is typically the slowest. The capability of discharge cell balancing can increase range obtainable from the battery pack. When you discharge a battery pack, it is considered to be fully discharged, i.e. 0% when the first cell reaches the cutoff voltage. The weakest cell in a battery pack is the first to reach the cut off voltage because it has the least capacity. Discharge balancing of series cells in a battery enables utilization of all the capacity from all the cells. There will also be an increase in battery pack life because the depth of discharge on that weaker cell will be reduced and will be increased on the stronger cells. This evens out the aging effects on the cells instead of having the weaker cell age faster.

Next, the SOC calculations that the BMS performs are never the exact value of the state of the battery. Typical SOC calculations, or more accurately named, estimations, are done through recording and integrating the current flowing into or out of the battery pack and comparing that with the rated battery capacity in ampere-hours. This is called the Coulomb counting method. In addition, some EV manufacturers also update the SOC estimation with the Open-Circuit Voltage (OCV) of the battery. This is the terminal voltage after the battery has not been under any load or charging process for a specified amount of time. The OCV of the battery is a very accurate indicator of the SOC of the battery. However, it is not available while driving or charging, and a rest time after either of those processes is required before OCV can be measured. The combination of those two SOC estimation methods is still fairly inaccurate, especially under dynamic loads such as city driving. Enhanced SOC estimation techniques are model-based estimators where the model of the battery’s characteristics and chemistry is incorporated. With a model based estimator, any battery chemistry can be utilized and future batteries with different chemistries can be easily adapted. The model based estimators are also more accurate because they can adapt to changes or inaccuracies in the battery or sensing. Things that would change over time are things such as battery aging and sensor noise. With a more accurate SOC estimator, the battery capacity can more accurately be followed and better utilized thereby increasing range.

With the capability of automatic charging, reduced components, increased battery lifespan, and improved EV range, all of the drawbacks of EVs can be eliminated or reduced by adopting wireless charging. This technology offers excellent conveniences for the user and any drawbacks relating to electromagnetic radiations are being swiftly addressed with better coil and shielding designs. Future improvements in battery chemistries can be easily implemented in EVs with a model-based SOC estimators that are also capable of increasing range with present battery chemistry. With high-power wireless charging and active cell-balancing, the charge time can be greatly reduced while also increasing range, thus accelerating the adoption of EVs.