Power Management of a Series-Hybrid Vehicle in Urban Cycling

Energy management has become one of the most important features in a hybrid electric vehicle, with the primary goals to reduce pollutant emissions and minimize fuel consumptions.  Pollution and traffic have motivated a revolution in the way people think about city transportation.  The first measures taken by urban, national and international governments were standards and limitations on vehicle emissions, known as Euro-xxxx (followed by a year number starting from 1992), and limited traffic zones in city centers, such as Congestion Charge in London, Electronic Road Pricing in Singapore, Congestion Tax in Stockholm, and Area C in Milan. These measures have been initiated by European cities to address three different challenges [1]:

All these policies and measures have combined to improve public transportation.  For this article, I will focus on what car companies are developing for hybrid electric vehicles.  Transit buses are considered to be the best candidate for hybrid applications because they operate on predictable routes with frequent starts and stops.  Hybrid propulsion systems are suited well for transit buses, because these buses have lower speeds, limited acceleration, less road grades and ample space available for batteries.

A hybrid electric vehicle is defined as a vehicle in which propulsion is provided by two or more propulsion systems – in this example: the internal combustion engine and the electric motor [2]. The traditional propulsion system cooperates with an electric traction device powered by an electrochemical accumulator. Typically, the primary source is the internal combustion engine that transforms the chemical energy of the fuel into mechanical energy, and/or subsequently into electric energy via an electric generator.  The auxiliary energy source provides energy to the electric motor.  There exist two principal configurations of hybrid electric vehicle:

The parallel-hybrid configuration is similar to a conventional vehicle.  The internal combustion engine is assisted by an electric motor to cover power peak and to provide traction power.  On the other hand, the series-hybrid configuration is more similar to a pure electric vehicle.  Traction power is provided by the electric motor and the internal combustion engine is not coupled to the traction wheels; this configuration avoids the necessity to install gear and clutching systems, and permits increased efficiencies.

In our study, we have considered a series-hybrid electric bus (see Fig. 1) where the primary energy source is a diesel engine and the energy storage system is a lithium polymer battery pack.  Starting with this information, we applied an energy flow model of the vehicle in Matlab Simulink, and considered two different driving cycles.  We simulated a control strategies that define the operational modality of the vehicle and describes the behavior of the energy storage system (Fig. 2 and 3). Figure 1: Architecture of the Series Hybrid.

In order to realize a strategy that optimizes the consumption of energy flowing in the whole system, we studied the vehicle, the devices and components present on board the vehicle. The hybrid electric bus is a mixed system that presents two different power sources that have different characteristics and have to cooperate to provide the requested amount of energy. The energy management is an open loop problem in which the input signal—that is, the requested power, which has to follow a desired trajectory defined by vehicle’s speed, is known.  The objective of the problem becomes the determination of a control variable that defines the correct ‘partialization’ of the two energy sources, and thus, the operational mode of the bus. The energy balance equation of the system is: 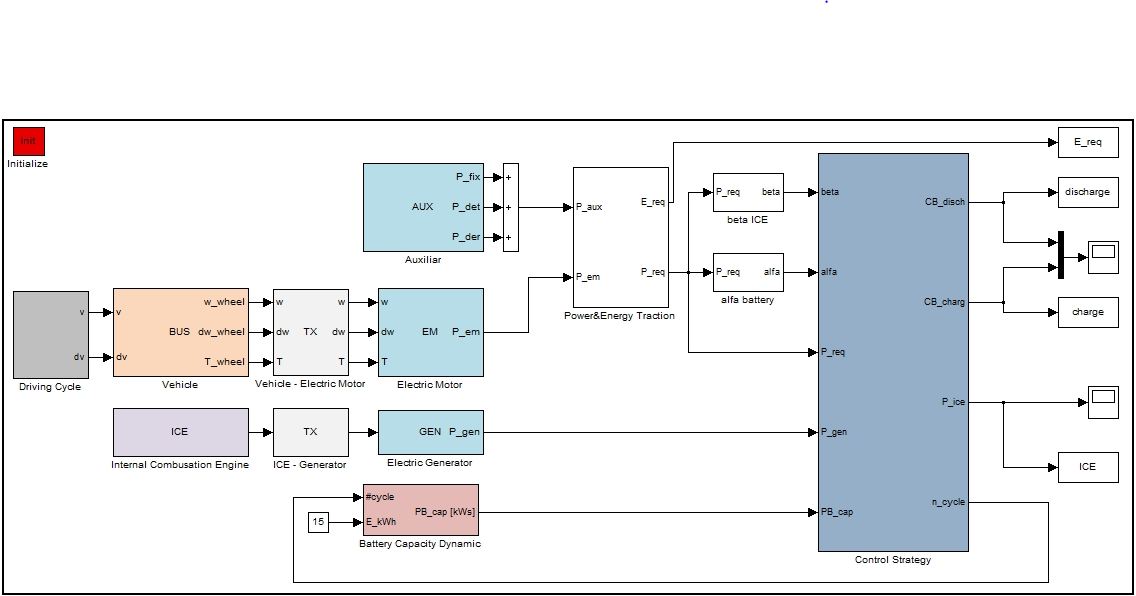 The energy storage system can receive and give power. In the energy balance equation, we have specified the requested power of the auxiliary system , because we applied a model in which—hypothetically—knows the requested power of every single system the control strategy could manage in order to increase the electric autonomy of the bus, if needed. We considered the auxiliary systems as a constant power generator, in this first analysis, which simplifies the problem and the energy balance equation into:

is the sum of traction power  , and power requested by the auxiliary systems  . Starting from this energy balance equation, knowing the requested power of the vehicle in the two different conditions described by the two different driving cycles—that is, Braunschweig City Driving Cycle and European Transient Cycle (ETC), we defined a control strategy considering simple if-then-else instructions. The key idea of the control strategy is to let internal combustion engine (always) works whenever β is minimum, in order to realize minimum fuel consumption and low pollutant emissions. We have also considered the possibility to work in pure electric modality whenever it is possible. This means that requested power is lower than minimum power of the internal combustion engine, and that the battery is charged. In other operational conditions, the selected modality is classical hybrid, where the internal combustion engine always works in its maximum efficiency range and the battery provides power to supply power peak.

We performed different simulations considering the two driving cycles. On Braunschweig City Driving Cycle, we did the first simulation considering the battery use from 100% to 20% of its state-of-charge. In this condition, the battery can provide traction power and pure electric operational modality for around 60% of the driving period of 1740 s. In the second simulation, we considered the possibility to let the battery making microcycle, from 100% to 80% of its state-of-charge.

The results of these two simulations were used to produce improved conclusions compared to other simulations that consider the European Transient Cycle (ETC). The ETC cycle is composed by three different parts—each of 600 s—that reproduce three different driving path: urban, extra-urban and motorway driving.  Considering the same control strategy, we observed that the battery could provide traction power and pure electric mode in urban driving for all of its life cycle that corresponds to around 5000 charge and discharge cycles.  Furthermore, the battery’s state-of-charge at the end of the 600 s of the urban driving has never fallen under 30%.  Those are interesting results considering that the battery in a vehicle like this is not designed to provide power for traction.  By improving the knowledge of energy requested by the auxiliary systems, the control strategy can be refined to increase the autonomy of the vehicle in pure electric mode.

Davide Dall’Olio received his Bachelor’s degree in 2011 and a Master’s degree in 2013, both in Automation Engineering from the Politecnico di Milano. During his master’s, he attended the Erasmus Programme at the Technische Universität Dresden in Germany. He is currently continuing on his research on power management in hybrid electric vehicle.

Giambattista Gruosso, a Senior Member of IEEE, was born in Potenza, Italy in 1973. He obtained his Master’s degree and PhD in Electrical Engineering at Polytechnic University of Turin, Italy. Since 2002, he has held both a Research and now an Associate Professor position at Polytechnic University of Milan, Italy. Recently, his research and consulting work has been focused in the field of electrical systems modeling, with an emphasis on automotive systems.  In this field, he has been involved in the analysis and design of innovative electromechanical components for transportation and in the development of control software for both terrestrial and aerospace electronic equipment. Additionally, he has been working on the development of architecture models for terrestrial and aeronautical power management systems.