My Fossil Fuel Free Trip Out of Range 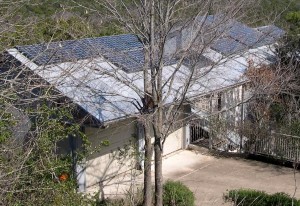 It was a cool clear morning when my wife and I backed our Nissan Leaf out of our Austin, Texas garage.

Thanks to over night charging with my 240-volt EV charger, my batteries were fully infused.  Since my 5.2 kWh solar system produces more electricity than I use, I had enough sunshine for about 88 miles according to my dashboard.  Of course, I knew that my ultimate destination was a little over 92 miles away to my friend’s house in San Antonio so a charge along the way would be in order.  Like anyone, I don’t want to run close to empty.

I had called ahead to the Nissan Dealer in San Marcos, Texas to make sure that their station would be available for charging up and they assured me that they would not only make that happen but would take us to the nearby outlet mall for shopping and lunch and return us to our car when we were ready.

From Austin, I set the cruise control at 55 and we headed south.  When we were about 15 miles north of San Marcos, I got a message on my Carwings screen that my destination was out of range and they directed me to the nearest charging station, which just happened to be San Marcos Nissan.  How convenient and thoughtful of Carwings.  We had about 37 miles left on our dashboard readout but that was not enough.  The courtesy car picked us up after we had said thanks to our Nissan hosts as they dropped us at the restaurant five minutes away.  After a long lunch and some shopping, we called the courtesy car to pick us up.  After about 2 hours of charging, we had plenty of juice to continue on our way.

In the stretch from San Marcos to San Antonio, I decided to increase my speed to 60 mph.  We arrived at our friend’s house in San Antonio with 27 miles still on the readout. 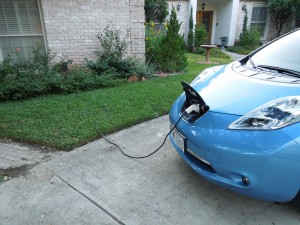 I plugged in the Leaf, with the 110 volt charging cord that came with the car, to an outside outlet at my friend’s house.

Luckily, they also have solar panels.  We unloaded the car and settled down for dinner and a movie on TV as well as a catching up on news between friends.

In the morning, the c

We had lunch on the River Walk and as the sun was setting, we attended a jazz concert nearby.ar was fully charged and ready to see San Antonio.  With the four of us buckled up, we set off to visit museums and other sights.

We even went by one of the 250 Charge Point public charging stations in San Antonio to see if my Charge Point card would work.  Since I had never gone outside of the Austin Energy network, I was curious.  Sure enough, I swiped my card at an HEB parking lot and voila it started charging.

We came to our friend’s home, plugged in the car at the outside outlet and had dinner while we “chewed the fat.”

Monday morning we slept in.  The car was fully charged again as we loaded up to head back home to Austin.  We would repeat our procedure of stopping in San Marcos for lunch and shopping and then head home.

According to my Carwings data, I used a little less than 16 kWhs going and a bit more than 16 kWhs on the return.

Maybe the strong north wind helped to push us to San Antonio and that accounts for the difference.  While in the Alamo city, we used 6 kWhs just driving around and seeing the sights.  I drove a total of 230 miles for an average of a little over 6 miles per kWh.  Nothing beats driving on sunshine! 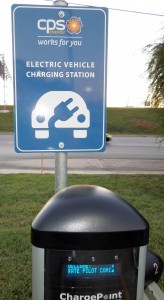 Dale and Pat Bulla of Austin, Texas have received the National Wildlife Federation’s 2008 Volunteer of the Year award. The Bullas received this prestigious award because of their volunteer efforts on behalf of the natural world. The Bullas were honored at the organization’s recent annual meeting in Keystone, CO.

Dale and Pat Bulla first participated in the National Wildlife Federation’s Habitat Stewards Training in 2000. Since then, the Bullas have become extraordinary activists and volunteers. For example, as a part of the city’s Wildlife Austin! initiative, the Bullas promoted habitat certification in their own Jester Estates neighborhood. Their efforts have resulted in over 90 new certified wildlife habitats in that neighborhood alone.

Other examples of the Bullas’ many activities include their efforts to restore native plants, remove invasive species, and create a trail on the Stenis Tract of the City of Austin’s Water Quality Protection lands. The couple has also organized a series of “native plant rescues” on construction sites, they spearheaded the creation of a native plant garden at their church, and they and others monitor water quality in their neighborhood waterways.

The Bullas’ own wildlife habitat is home to roughly 200 species of native plants. When they irrigate their property, they use water captured from five rain barrels, which store over 600 gallons of rainwater. The result is an attractive, wildlife-friendly garden that has been featured in the Austin-American Statesman, in the television documentary “Texas: The State of Springs,” and on KLRU’s Central Texas Gardener, among others.